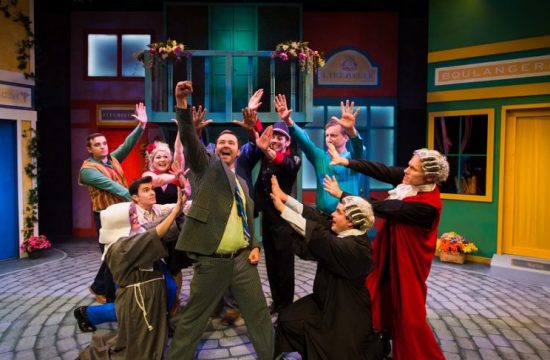 The cast of “Amour” at NextStop Theatre Company. Photo by Lock and Company.

If you’re looking for a delectable patisserie of music, color, and whimsy, look no further than “Amour,” a Broadway musical based on a classic French fable, now playing at NextStop Theatre Company, directed by Gloria DuGan.

… a charming and musically engaging show that will leave you humming a happy tune in your heart.

The story is set in the quaint Paris neighborhood of Montmartre several years after the end of World War II. Montmartre sits atop a hill overlooking the city and was home to a wide variety of artists, free thinkers, mimes, musicians, and prostitutes. Our hero Monsieur Dusoleil is far more ordinary, however – a simple working man in a factory without real friends. His life changes dramatically, though, the day he gains a mysterious power – the ability to walk through walls.

“Amour” is based on a 1940’s fable by Marcel Aymé titled “Le passe-muraille,” or The Man Who Walked Through Walls. Composed by Michel Legrand with the original libretto in French by Didier van Cauwelaert, the American production is translated into English with finesse by Jeremy Sams. I found myself giggling time and again at the cleverness of many of the rhymes (beserk with lurk(ing) with shirk(ing), for instance!) and the clever lyrics are a major source of humor throughout the show.

The music is lush and highly sophisticated but so easily accessible that you’ll find yourself humming bits and pieces of melodies as you leave the show. I was impressed with the many partner songs, where musically distinct solos were sung at the same time in beautiful layers. I also enjoyed little bits of very French humor, for example when La Marseillaise (the French national anthem) comes sneaking into a song and when Dusoleil considers stealing a loaf of bread à la Jean Valjean.

Our quiet hero M. Dusoleil is played to perfection by Ryan Khatcheressian. From his first depressed hums to his blooming defiance, to his hopeful exuberance and conflicted conscience, Khatcheressian gives us a magnificently broad performance as he takes us on an “everyman’s” journey from bland to spectacularly unique. I enjoyed his vocal range as Khatcheressian would often hold back his vocals to present the shy and retiring M. Dusoleil, but would sometimes burst into full-voiced tenor triumphs at climactic moments throughout the show.

Molly Hicks Larson was one of my favorite characters in the show as she was simply hilarious in playing the Montmartre prostitute. Her facial expressions especially had me in stitches, but she was also wildly expressive in her vocals and gestures. Sam Nystrom and Christopher Gleason as the two policemen and prison guards were also quite funny and utterly charming. Teresa Danskey as Dusoleil’s love interest Isabelle was also wonderfully expressive and had a lovely light and lyrical soprano voice.

The set (Jack Golden)and costumes (Judy Whelihan)complemented each other beautifully, for example when Dusoleil’s light green shirt is just a shade lighter than the green building for his scene. The colorful set and costumes were a highlight of the show that added to its charm. The small orchestra led by Blakeman Brophy, although hidden behind the set, gave “Amour” life as the music was a true star of the show.

As this is a fable and not a fairy tale, I must caution that there is a surprising twist at the end. I won’t spoil it, but be forewarned that fables are meant to leave you thinking. The show doesn’t end on a maudlin note, however, and the audience was all smiles as we left the theatre after this truly delightful show! I highly recommend “Amour” at NextStop Theatre Company as a charming and musically engaging show that will leave you humming a happy tune in your heart.

Advisory: Adult content and dialogue. Not recommended for children.