Theatre Review: ‘Beauty and the Beast’ at Way Off Broadway Dinner Theatre 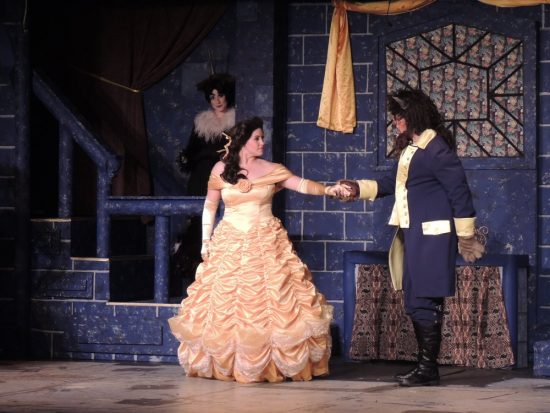 Who can resist a live rendition of one of Disney’s most enchanting love stories ever? Certainly no man, woman or child. The Way Off Broadway production of “Beauty and the Beast” is now playing through August 18, 2018, in Frederick, Maryland. Seeing this show is assuredly worthwhile for the entire family. With a dinner buffet and cozy theatre ambiance, everyone can watch this lively production in relaxation mode. The afternoon performance I attended was a mixed crowd with people of all types and age groups. Of course, there was a large number of very young, starry-eyed girls with mounting anticipation to see Belle (played by Jamie Lea Kiska). Though I got the sense all could feel the electricity in the air once the food began to settle and the lights dimmed as the production commenced.

The Way Off Broadway Dinner Theatre’s ‘Beauty and the Beast’ merits a genuine recommendation.

What struck me from the beginning of the show was the fluidity and choreography of all the actors and stagehands. Not just in the timing and harmony in the songs, the quirky puns and even the dynamic, touching moments, but in their lack of any hiccups, even when changing sets. The cast was clearly on their A-game and it showed in the reaction from the crowd. There were many applauses, even in the middle of some scenes.

Belle (Kiska) did not disappoint with a sugary charisma and elegant voice. Kiska was alluring, strong and bursted wit, which I am sure the audience warmly received. The chemistry between the lead actors, especially Cogsworth (Paul Cabell), Lumiere (Jeremy Trammell) and Mrs. Potts (Megan E. West) had many laughing and chuckling -including me. Their interactions complemented the Beast (Noah Israel), who did well in portraying the irritable monster, given his awkward costume and small build. Speaking of brawn, there’s no question Gaston (played by David Jennings) was quite a hit with the crowd. Jennings’ performance as Gaston was especially charming. Clearly, he is comfortable playing this role. Gaston, Cogsworth and Lumiere had some especially funny one-liners that surely flew over the heads of the kids, much to the delight of the adults in the room.

There were two main songs that were showstoppers: One was the song “Gaston” in the Tavern scene, which was an intoxicating attempt by the townspeople to uplift Gaston’s beaten ego after Belle’s rejection of his marriage proposal. Choreographer (Dee Buchanan) and music director (Jordan B. Stocksdale) truly highlight the strengths of the ensemble and supporting actors in this number with a tasteful display of boisterous humor and clacking, metal mugs. The second showstopper was the main theme song, “Beauty and the Beast,” which had most of the audience, I think, either close to tearing up or at least singing along under their collective breath. Another noteworthy song number was “Human Again,” which involved all the enchanted objects (including the kitchen utensils), each with a restless craving to return to their old selves.

Co-directors Bill Kiska and Jordan B. Stocksdale also oversee the staging and manage to bring a modest set to luster with a seasoned and enthusiastic cast. Although the set never feels ornate or Gothic by any stretch, the dark, morose backdrop for the Beast’s lair certainly gives the necessary contrast to the bright, colorful glow of Belle’s fortitude and virtue. Belle’s kindness eventually peels back the layers of the Beast, revealing his true sensitivity and thoughtfulness. I simply gushed with reverence.

Overall, this production stayed on point with what one would expect from “Beauty and the Beast.” It is memorable because of the energy of the actors and the attention to the details by the directors. The sound system could use a little more boom, but the presentation put together by the actors is what truly makes this show worth watching again and again. Not to mention, the food and service is good quality. I was very surprised to see some of the actors were, in fact, also part of the staff that waited on them during their meals.

Let’s just say The Way Off Broadway Dinner Theatre is a very, very congenial experience. Their production of “Beauty and the Beast” merits a genuine recommendation.  Put it on your bucket list and make sure to bring a mighty appetite with you. You will not be disappointed. Tickets range between $45-$50 for adults, and $35-$40 for children under 12, depending on the night of the show.

Running Time: Approx. 2 hours and 45 minutes with a 15-minute intermission.

“Disney’s Beauty and the Beast” plays through August 18, 2018, at The Way Off Broadway Dinner Theatre – located in the Willowtree Plaza, 5 Willowdale Drive, Frederick, MD. For tickets, call the box office at (301) 662-6600 or click here.