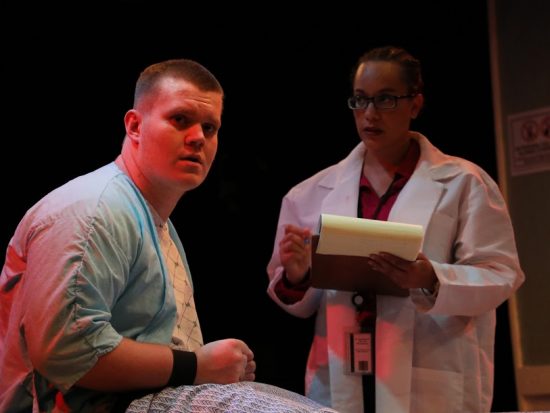 In modern times, as in any, the legality of a binding contract can be both a benefit and detriment. In the play “Consent,” featured now until August 26, 2018, at the Spotlighters Theatre in Baltimore, the clarification of legalities don’t always define right and wrong as it relates to mercy and humanity. In a performance with three main actors and a number of voice actors and stagehands, the absence of scene changes is unnoticed due to the high intensity, thought-provoking theme of the story and the rambunctious animation of the actors.

What struck me at first was the vulgar language used by two doctors who seemed more inclined to address personal matters then tend to the pain and needs of their patient, Mr. Thirty Seven, played by Brandon Richards. Once I got passed the foul-mouthed physicians, it became very evident there were sinister undercurrents in this one-sided plot. A man, a patient, strapped to a hospital bed being asked to sign document after document while the doctors carried on about the state of their dystopian world outside. They described a zombie-like people, desperate to break into their medical research facility for unknown reasons.

This story may be bitter on the surface, but the incremental morsels of humanism underscores its social relevance.

Where this performance lacked in creative diction, it more than made up for in its blunt, parallel reality. The world they exist in, where the ease for which desperate people are taken advantage of, made me wonder how it wasn’t mirroring our own. Much of this is attributed to the realism and intensity of the actors. Although I felt it was an unusual play, it was certainly powerful. Of the three characters, the cold natured Dr. Gertrude Berringer (Tina James) provided a sterile perspective of following the rules. Her counterpart, Dr. Daniel Fredricks (McKinley Wallace III) presented an arrogant indifference toward the nature of their work, as much as he took pleasure in belittling the patient, Mr. Thirty Seven. I found Wallace’s portrayal of Dr. Fredricks profoundly brash, in such a manner one might expect in a college football locker room.

Throughout much of the play, most of the dialogue was between the two doctors, who often went back and forth about the protocols of their work and occasionally reacting to alerts and interactions with an A.I. robot voice named Little Sister (played by Rachel Dlugash). In one scene, Dr. Berringer was forced to punish Dr. Fredricks by smashing his hand with a hammer. The choreography of this moment made me flinch, and I even heard yelps and other reactions from people in the audience. However, once the breathing mask was removed from Mr. Thirty Seven and the interactions became a threesome, the true explosiveness of this play surfaced.

Spotlighters Theatre is a very small, intimate venue and everyone in the audience is in close proximity to the stage. So close in fact, in one scene, Dr. Fredricks decided to light a cigarette next to the patient and the smell of smoke gave it a real 4-D effect. I wondered if anyone else was bothered by the smoke. The props on the stage were sufficient, though not too extravagant. The purple lights and medical charts with body scans was a nice touch. Since this story takes place in some futuristic world near social collapse, it worked very well. The patient’s table was quite unique in hiding Richards’ legs to give the appearance of a double amputee. The set crew, Alan Zelma and Fuzz Roark, certainly deserve praise for the stage and lighting effects.

There is another dimension in this performance that involves some voice actors. Since it is set in one location throughout the whole story, the only interactions with other characters happen on the loudspeaker with Little Sister and eventually with Mr. Thirty Seven’s parents. It’s in these interactions the reality of the brutal and sad aspect of this play come to light. This story may be bitter on the surface, but the incremental morsels of humanism underscores its social relevance. If you don’t mind raucous language enveloping a sobering picture of just how much power and control we sign away to others, then this play is for definitely for you.

Advisory: Adult language and content. No one under 16 admitted without an accompanying adult.

“Consent” is playing now at the Spotlighters Theatre in Baltimore until August 26, 2018. For more information or to purchase tickets, click here.