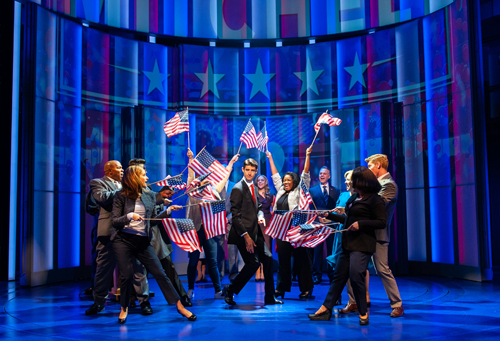 “Dave,” the new musical comedy adapted from the Oscar-nominated 1993 movie of the same name, is making its world premiere appropriately at Arena Stage, a stone’s throw from the White House. During this most turbulent and divisive of political times, it is both timely and a breath of fresh air. With a top-notch Tony and Pulitzer Prize Award-winning creative team and a tremendously talented cast, this new musical will make you laugh, give you hope and touch your heart.

The story by the late, three-time Tony Award winner, Thomas Meehan (“Hairspray,” “The Producers”) and two-time Tony Award nominee, Nell Benjamin (“Mean Girls”,” Legally Blonde”), with music and lyrics by Pulitzer Prize and two-time Tony Award-winner, Tom Kitt (“Next to Normal,” “If/Then”) and Benjamin, has been updated. It includes all the social media bells and whistles that weren’t even invented in 1993 when the Warner Brothers movie, starring Kevin Kline and Sigourney Weaver, made its debut. Cell phones, Twitter, and a 24/7 news cycle are now part of our contemporary political world. (It makes you long for those simpler times). The script skewers the politics of the moment with biting wit.

…this new musical will make you laugh, give you hope and touch your heart.

With his YouTube videos and an uncanny resemblance to President Bill Mitchell, Dave Kovic (the always appealing Drew Gehling – “Waitress,” “Jersey Boys”) lands a job as the president’s double. He had been a dedicated high school teacher of American history with a passion for Lincoln (notably his Gettysburg Address) until he was laid off due to budget cuts. Adding insult to injury, he struggled to take care of his aging father and lost him as well.

What was to be a quick job turns into something more when the newly re-elected Mitchell, the epitome of everything loathsome in a politician, has a serious stroke while making love to his mistress, White House aide, Randi Hagopian (Rachel Flynn). Instead of following protocol, Mitchell’s Chief of Staff (and ex-CIA), Bob Alexander (the wonderfully malevolent Douglas Sills), has other ideas. With the help of the communications director, Susan Lee (the fabulous Bryonha Marie Parham who also gets to show off her soaring voice) and offering him the Holy Grail of staying in Lincoln’s Bedroom, Dave is convinced in “Bad Example” to go against his better judgment. He idealistically thinks he could make a real difference.

Unfortunately, Dave is just a figurehead as Bob pursues his own agenda. Dave must also deal with the First Lady, Ellen Mitchell (the wonderful Mamie Parris – “School of Rock”,”Cats”). Her husband’s dalliances have caused her to develop a tough persona to hide her pain and humiliation. Ellen focuses on her own cause of elder care, something that hits close to home for Dave. Her emotions swing from one end of the spectrum in the sarcastic, tango-like “Last Time I Fake It” to “Not Again,” as she warms to her “husband.”

With the help of his stoic and man-of-few-words (“I couldn’t say”) Secret Service agent, Duane Bolden (Josh Breckenridge who packs a punch in “Not My Problem”), Dave goes rogue in the nicest possible way, causing the president’s approval ratings to soar. He meets with the public and saves a Disney star who fractures the Star Spangled Banner at a Nationals game with vocal affectations (so familiar in our pop stars) – and then forgets the words. What a feeling it was when the whole audience rose to finish the anthem with Dave and the cast. With the help of his best friend, accountant Murray Stein (a charming Kevin R. Free), Dave finds a way to fund Ellen’s elder care project that was cut from the budget by Bob.

All of this infuriates the chief of staff and Sills practically steal the show with his huge voice and chorus line of CIA operatives, wonderfully choreographed by Tony Award nominee Sam Pinkleton, in “Kill That Guy.” Gehling, with his lanky body, boyish good looks, mastery of physical comedy and stunning voice, is the heart of the show. He is surrounded by a tireless cast, many of whom perform multiple roles while moving the set and set-pieces in this fast-paced production directed so skillfully and joyously by Tony Award nominee, Tina Landau.

Another show stopper is that glorious set. Beautiful lighting by five-time Tony Award nominee, Japhy Weideman, and projection design by Drama Desk Award winner, Peter Nigrini, help make the circular set design by Tony Award nominee, Dane Laffrey, simply breathtaking. Giving a nod to many of our monuments, the many layers of semi-circular walls create movement and interesting spaces. TV screens sit on either side and are used to great effect.

Yes, the ending is a bit corny and sentimental like its movie counterpart. But like Frank Capra’s 1939 classic, “Mr. Smith Goes to Washington,” in difficult times, we need happy endings.