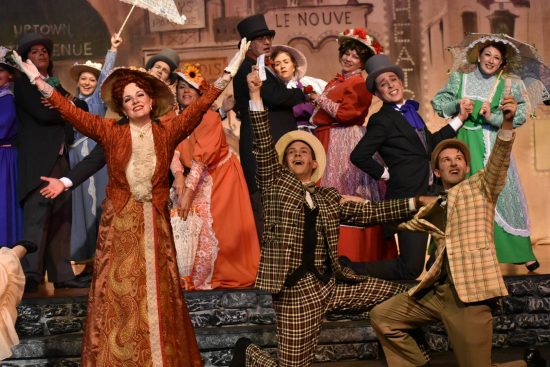 The cast of “Hello, Dolly” at Glyndon Area Players

“Hello, Dolly!” presented by the Glyndon Area Players and directed by Homero Bayarena is a non-stop theatrical romp created by a fabulous cast of characters. A beautifully painted back-drop and set designed by Homero Bayarena and Rose Mooney firmly plants the audience in 1890s New York City. Before Dolly even sets foot on the stage, the audience seems ready for her entrance thanks to a very creatively designed marquis dedicated to Dolly herself, hung high above the stage.

…a feast for the eyes and the ears.

From under this marquis, Dolly makes her grand entrance, which, as always is something to behold. Dawn O’Croinin as Dolly Levi commands the stage as soon as she appears – in her own carriage naturally. Ms. O’Croinin has a beautiful soprano voice and flawlessly sings the songs, I am sure that most audience members know by heart. But what is even more impressive is her presence on the stage. Dolly Levi is a force to be reckoned with. She’s lived her life and created a place for herself in this man’s world. Ms. O’Croinin fully embraces that attitude and manages to spend most of the show “managing things,” all with a twinkle in her eye.

As the object of her affection, Horace Vandergelder as played by Homero Bayarena, is an abrasive curmudgeon. Mr. Bayarena plays the role with gusto. His grumpiness is the perfect match for Ms. O’Croinin’s charm. The two play off each other beautifully, and you can see the affection they have for each other grow throughout the show. As the town Hay and Feed shop owner, Horace employs Barnaby (Mark Quackenbush) and Cornelius (Stephen Strosnider) as the lovable shopkeepers up for an adventure in the big city. Both actors bring flair and comedy to the production.

Mr. Strosnider particularly is quite talented with physical comedy and is the perfect blend of excited and nervous. Thanks to Dolly Levi’s meddling – naturally – the boys meet their matches in Irene Molloy (Colleen Esposito) and Minnie Fay (Sophie True). The ladies of the hat shop are also talented dancers and singers. The quartet provides some of the most memorable dance breaks in the show. It’s fun to watch their sometimes-unscripted interactions. You can see the actors’, as well as the characters’ affection for each other throughout the production.

This cast of characters spends their time interacting with a fairly impressive set. With multiple moving set pieces, the audience is transported to the middle of a feed shop or Harmonia Gardens or even a Suffragette parade in the streets of 1890s New York. Between the multi-leveled shop facade and the famous stairwell providing Dolly her well-known moment in the spotlight, the designers outdid themselves. The beautifully painted backdrops are an added bonus to this functional and fabulous set.

When the costumes (designed by Homero Bayarena, Kari O’Donnell and Susan Zepp) are added to this set, the whole show seems to come alive. The cast of well over two dozen are draped in period dresses and suits in almost every color of the rainbow which seems to sparkle in the spotlights. “Hello, Dolly!” has always been an opulent show full of rich colors and patterns. The designers at Glyndon Area Players fully use this design choice to their advantage, creating all sorts of fun accessories for the cast, including hats (flowery and Top alike), bowties, and bags.

A special note should also be made to commend the ticket-takers and greeters at the door. From the moment audience members entered the space, they were made to feel welcome. On a rainy opening night, the workers’ smiles and warmth went a long way to create a joyful atmosphere, which was carried on through the production.

With a creative design, a cast so strong and supporters cheering them on “Hello, Dolly!” is a feast for the eyes and the ears. The staff at Glyndon Area Players clearly had a good time producing this particular show. And every bit of that joy is reflected on the stage and back into the audience.

Advisory: Great for all ages!