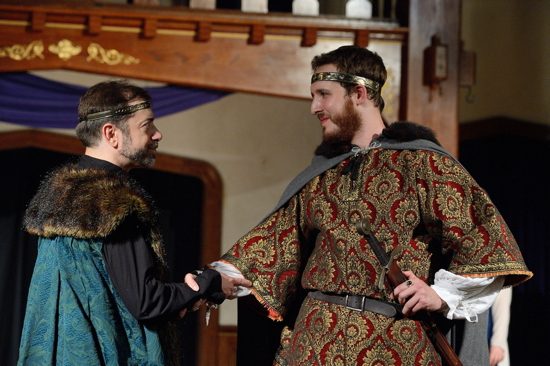 Zach Brewster-Geisz and Dean Carlson. Photo by Will Kirk.

As far as Shakespearean plays go, “King John” (directed by Tom Delise) is not only rare, it is virtually unknown, even for people who love Shakespeare. One might expect a theatre company to focus on Shakespeare’s well-known plays, given the selection of works that peak the public’s interests, but the Baltimore Shakespeare Factory has stated their goal is to “stage the entire canon (38 plays) of Shakespeare.” Therefore the time, essentially, is now for this scarcely produced program.

But where “King John” is bereft of notoriety, it stands rich in language, drama and a flowing storyline as only the master Shakespeare could deliver in a history play. King John’s rule is challenged by Constance, his brother’s widow, who contends her teenage son, Arthur, is the legitimate heir to the throne. She is supported in this claim by King Philip of France, who clearly has great influence over Arthur and stands to gain from his ascension.

There’s no question all the actors in the BSF are of very fine quality. They were galvanizing, emphatic even, and polished to impress.

There are many dynamics in motion during this play, and even if I lost track of who was who or had misunderstandings of things said, the thing that keeps this play in check are the actors’ articulate kinetics, facial and body language, interactions with the audience and overall superb skills. Constance, played by Anne Hammontree, was marvelous in her portrayal of Arthur’s mother, who reaches the point of near hysterics over a peace settlement between King John (Dean Carlson) and King Philip of France (Zach Brewster-Geisz) with the marriage between the Dauphin (Grayson Owen) and King John’s niece Blanch (Tess Garrett). There was a hefty dowry of lands to the French to sweeten the deal which only exacerbated an already stormy situation.

Notable mentions in this impressive performance include Philip the Bastard (Chris Cotterman), who is quite a comical rascal and his audaciousness pushes the boundaries of his good fortunes. Cardinal Pandulph (Sian Edwards) displays overbearing arrogance when speaking to monarchs and subjects in a memorable way. Joe Lewis, like most of the cast, played multiple roles, doubling as the fiery Duke of Austria and the passive Earl of Salisbury. Hubert (Flynn Harne) displays compassion where otherwise there seemed to be none toward the young Arthur. Unlike with larger stagings, the small, intimate setting for this production opened numerous opportunities for the actors to address individuals in the audience (even locking eyes with me from just feet away). This was an unexpected delight.

There’s no question all the actors in the BSF are of very fine quality. They were galvanizing, emphatic even, and polished to impress. The ensemble moved from one act to the next with fluidity. What would have made this show much better are the aesthetics, which costume designer Kendra Shapanus could use a little more imagination with. The costumes were fair but painfully frugal. I thought the Cardinal costume looked like something from a discounted Halloween rack. There were few props for the stage, but with everything in such close proximity, the focus was squarely on the actors and therefore not necessary. They left me in awe of their talents, but my eyes craved more shimmer in the wardrobe to complement their elegant diction.

One last noteworthy mention of this production is the cast’s musical numbers before the show started and during the intermission. Music director Jamie Horrell picked some popular songs from the classic rock repertoire to entertain and showcase the versatility of the actors. Some numbers chosen were “Gimme Shelter” by the Rolling Stones and “Sunday Bloody Sunday” by U2, but there were several great hits on their set list. What struck me was every song had a different cast member singing lead vocals. As if their acting talents weren’t charming enough, this production company adding cover band to their program is just too stirring to resist.