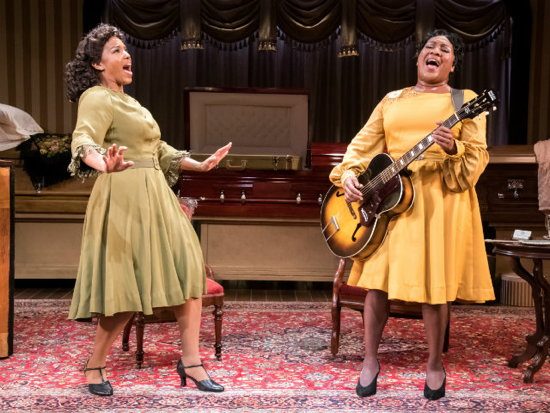 Ayana Reed, left, and Roz White star as the title characters, respectively, of “Marie and Rosetta.” Photo by Stan Barouh.

What do Elvis, Johnny Cash, Little Richard and Jimi Hendrix have in common? To start, you more than likely know their names and signature musical styles. Perhaps you own an album or two. You might even go so far as to say one of these men is your all-time favorite musicians. But do you know who paved the way for these stars to shine? Can you guess whose fingers birthed the twangy slide of the electric guitar? Which voice first brought about the desire to swing one’s hips?

Sister Rosetta Tharpe is her name, and out of the Church of God in Christ, her music came.

I admittedly had no clue who this magical, musical Queen was before yesterday. From today forward, however, I’ll think fondly of Sister Rosetta. I now know who I’ll turn to when I need that extra dose of spiritual inspiration.

Come prepared to laugh, cry and be mesmerized by the music of Marie Knight and Sister Rosetta Tharpe!

Quite honestly, I can’t thank Mosaic Theater Company enough for having taught me the story of such an extremely talented, yet underappreciated musician, one I likely never would have heard had I not experienced “Marie and Rosetta” at the Atlas Performing Arts Center.

Set in 1946, George Brant’s play opens with Marie Knight finishing Sister Rosetta Tharpe’s makeup in a funeral home down in Mississippi. But Marie isn’t just there to help Sister Rosetta look her best. Marie is there to showcase her own voice and piano skills (and perhaps more importantly, prove to her herself that her musical talent can, should and will shine as brightly as her idol’s.)

Over the course of the dress rehearsal, Marie and Sister Rosetta set off to explore each other’s personalities, life stories and musicalities. With each scene, the two Black women unwrap a different dichotomy and the various emotions that come along with it. For example, one moment, Sister Rosetta is warning Marie about how she’ll be treated much differently in the South, the next Marie is cautioning Sister Rosetta against crossing an imaginary musical line drawn by the Church. But despite their differences, their mutual respect for one another, as well as for the joy music brings, keeps them together until the music fades away.

Played by Roz White, Sister Rosetta is a spunky, self-reliant woman, who doesn’t dare put what others think of her, or her relationship with God, above what she believes in her own heart. From the moment blush touches her cheeks, to the closing spotlight on her pensive, upward expression, White is exuberant as Sister Rosetta. Whether speaking or singing, her voice captures the humble wisdom of an artist who has experienced so much pain but remains livelier than most ever will be.

Meanwhile, Marie Knight is a young 23-year-old (mistaken at first for 19) with two children by a pastor. Ayana Reed is a perfect portrayal of the prim and proper church quartet member turned gospel star. From her shaky, anxious hands to her reaction to Sister Rosetta’s swear words, Reed’s personification of innocence (and ignorance) feels effortless.

Not only did White and Reed blow me away with their acting, the voices brought “goosebumps to my goosebumps.” The music is what really tied Mosaic’s production of “Marie and Rosetta” together. Musical Director e’Marcus Harper-Short and Director Sandra L. Holloway’s decision to only cast local musicians and actors truly highlights the plethora of talented artists who call Washington home.

Additionally, Harper-Short’s upbringing in the Church of God in Christ was apparent in the way White and Reed accentuated certain words and added nuances specific to the Church. The “nirvana of performance” he was aiming for could be felt deep in one’s bones. Meanwhile, Holloway’s decision to bring the musicians to the stage, incorporating them into the acting, was a smart card to play. Not only do Ronnette F. Harrison (piano) and Barbara Roy Gaskins (guitar) deserve to be under the spotlight as accomplished musicians themselves, they also symbolize the souls of the women whose music they play throughout the show. My heart felt full watching the nods and smiles between actors and musicians. Those small, yet powerful moments showcased the sacred connection made between the heart and soul, the breath taken right before one creates.

In regards to the set, Andrew R. Cohen carefully balanced out the liveliness of the characters with the eerie, uncomfortable feeling a funeral home stirs up. The stage showcase a mixture of a funeral parlor, storage closet and coffin display room. That gut-wrenching, heartbreaking feeling Cohen achieved in the set only grew deeper once Jonathan Alexander cut the dim lights to one soft spotlight towards the end of the show.

Overall, “Marie and Rosetta” takes the audience on a journey through the ups and downs of life, ins and outs of self-discovery, and societal standards these, and so many other Black Women continue to have to fight against in order to make their voices heard and respected.

Come prepared to laugh, cry and be mesmerized by the music of Marie Knight and Sister Rosetta Tharpe!

Advisory: Intermittent profanity. This show is recommended for audiences 16 and over.

“Marie and Rosetta” plays until September 30, 2018, at Atlas Performing Arts Center, Lang Theatre in Washington, DC. For more information or to purchase tickets, call the theater at (202) 399-7993  or click here.