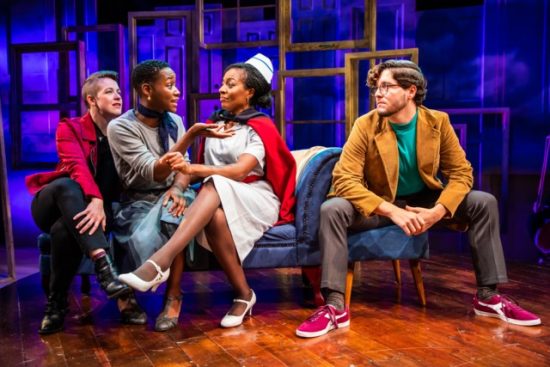 The world of the play revolves around Tilly, a bank teller from somewhere in Illinois who is full of rich, buttery melancholy. Her sadness and ennui are that of a New Wave French film or a dime novel from decades ago — a sadness that is a perverse sort of pleasure. It’s also an aphrodisiac, first ensnaring stifled tailor Frank and Tilly’s boundaries-challenged therapist Lorenzo, then physicist-turned-hairdresser Frances and her partner Joan, a usually stolid nurse.

…a delightful confection of surrealism and silliness.

Then, tragedy! Tilly finds happiness, and with it, loses her charms. Her four occasional amours band together to bring her back to the sad side as an epidemic of melancholia descends on the land.

Tilly is played by Billie Krishawn, who is on track to join the Washington area’s biggest stage stars. She comes to this role having just delivered one of the best performances of this summer’s Capital Fringe Festival in Stephen Spotswood’s “Andromeda Breaks,” and last year delivered a well-received performance in a supporting role in Avant Bard’s “Emilie: La Marquise Du Châtelet Defends Her Life Tonight.” Krishawn brings light and energy to the ethereal Tilly without turning her into a cartoon.

As misery fetishist Frank, John Austin giddily offers a tightly wound man learning to let his freak flag fly. Christian Montgomery has none of Frank’s inhibitions as Lorenzo, a pile of id in clashing outfits who is in self-imposed exile from a never-named European country. Mary Myers as Frances delivers some real emotion in the midst of this absurdity as she becomes entranced by Tilly’s intangibility. In one of the nicer turns of the narrative, Frances’s infatuation with Tilly actually strengthens her own long-standing relationship with Joan (played with regal precision by Lilian Oben).

This is a story of big feelings but small incidents, and Constellation’s cozy space at Source serves it well. A.J. Guban’s soft lighting reminds us that we’re in a world that’s close to ours but not quite real; Kitt Crescenzo’s colorful costumes neatly underscore the exaggerated mood of the play without mocking its characters.

Sarah Ruhl is a playwright who many theatregoers either love or hate. But perhaps because this is an early work — first produced in 2002, it predates those clean houses, cell phones, and vibrators — it is a bit more accessible. “Melancholy Play” is a fine entry point for Ruhl, as well as a fine opportunity to see, in Krishawn, one of the District’s emerging talents.