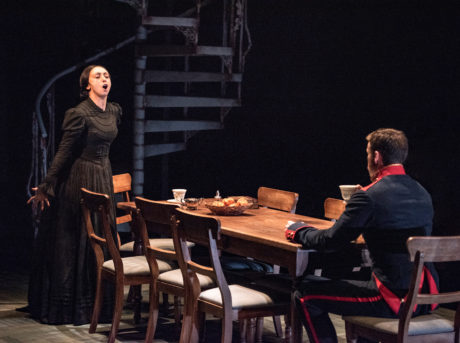 The 1994 musical “Passion” by Stephen Sondheim and James Lapine won the Tony Award that year for best musical. It was inspired by the film ‘Passione d’Amore’ which was based on the Iginio Ugo Tarchetti novel ‘Fosca.’ The story follows a young and passionate soldier Giorgio as he meets Fosca. The themes revolve around obsession, love, and beauty. Signature Theatre has proven themselves to master Sondheim’s complex work and that is no different with “Passion,” directed by Matthew Gardiner and music directed by Jon Kalbfleish.

This piece of Sondheim’s succeeds at celebrating his signature style. The score is nearly operatic and rooted deeply in language. The music also flows beautifully in and out of chorus numbers, arias, and underscoring. There is truly no place to break the show without completely halting the action of the music. Therefore it is 2 hours with no intermission.

…gorgeous music and the stellar performances and design choices for Signature’s production make it worth seeing.

Some of the relationships portrayed in this piece are emotionally abusive. This show could certainly be triggering to some.

Claybourne Elder’s performance as Giorgio is truly dynamic and sultry. His beautifully powerful voice soars through the theater and he is able to bring so much life to his character.

Steffanie Leigh plays his beautiful lover, Clara. She lights up the stage with her delightful presence which is a delicately sensual. Leigh and Elder duet well together on the opening number.

Fosca, the obsessively passionate cousin of Giorgio’s Colonel, is played by Natascia Diaz. She appears so frail but sings her role with strength and love.

The set design, by Lee Savage contained multiple levels and was mostly muted, except for the glorious flowers hanging from the ceiling. Designing a set for an alley stage is not easy, but Savage accomplished one that was versatile and created a beautiful world for the story.

Robert Perdziola designed the costumes, which were truly lovely. Clara’s gowns were the main highlight, as everything and everywhere else in the story is meant to be drab. Each item she entered wearing was even more stunning than the one before. That being said, the men’s military uniforms were sharp and crisp and Fosca’s dresses served her purpose well.

“Passion” is complicated and certainly not one of Sondheim’s most well-known works. However it contains some gorgeous music and the stellar performances and design choices for Signature’s production make it worth seeing.