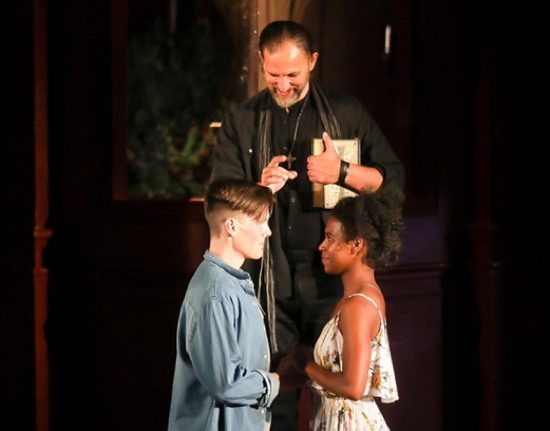 This very spirited production at Shakespeare Theatre Company is part of their annual Free-For-All; it is a wonderful late-summer treat for theatre lovers and those new to live theatre. Using a club-like set with lots of gorgeous wood and some really modern, comfortable looking red loungers. STC’s production is a very physical production, evoking a youthful vibe well-suited to the story.

“…it is a wonderful late-summer treat…”

“Romeo & Juliet” is the story of two warring families; the daughter, Juliet of the Capulets, who is 14 and of marriageable age, falls in love with their chief rival’s son, the Montague’s Romeo. At the start of the story, he is pining for another beauty; it is a languishing, self-dramatizing affair of the heart that provides a lot of fodder for his friends and keeps him at the center of attention. Then he sees Juliet at a ball the Capulets are throwing, which he and his posse have crashed. The rest of the story is about the futility of whatever drives this rivalry between the families and the number of deaths of young men, and one young woman, it causes. Truce has a very high price in this case.

As the young lovers, Danaya Esperanza as Juliet and Sam Lilja as Romeo, are beautiful, young, healthy creatures who truly believe love will conquer all. Their joint wonder in each other, full of dewy looks and kisses and heartfelt promises is stunningly portrayed by Esperanza and Lilja.

However, Jeffrey Carlson as Mercutio, and E. Faye Butler as the Nurse (to Juliet) nearly steal the show between them. Not only does Mercutio seem to get the best lines (as a welcome relief from the earnestness of young love), his languid delivery and the physicality of his performance is just hysterically funny. During one fight scene between the young men of the Montague and Capulet factions, his dodging and capering add a really funny note that underscores the boredom of these young men who seem to have nothing better to do than look for reasons to infuriate each other. He feints and dodges with such ease that he seems jaded, even while leavening a knife fight with a bon mot or two. His death, which precipitates the events that eventually lead to the sorrowful conclusion, really leaves one with a sense of what might have been if he had been able to live long enough to outgrow the shenanigans.

Butler is hysterically funny. She loves her charge and can deny her almost nothing; she’s also earthy (obliquely letting in Juliet on the realities of the marriage bed is a mesmerizing scene). One isn’t sure just how much Juliet really understands of the mechanics at that point, but her recoil and then gulping acceptance is a funny moment. Acting as the go-between for Romeo and Juliet, she struts through the marketplace with her hapless servant carrying all her bags, including her purse slung around his neck, and rules the stage.

As the Prince of Verona, Craig Wallace as Escalus has the proper gravitas and frustration at the disruptive antics of these two houses at each other’s throats. His ire boils over as he warns the mothers that neither tears nor personal affinity will stay his decree of exile for Romeo, and should he return to Verona, his death. The man has had enough of public brawls and property destruction and with an economy of movement and quiet, measured yet biting tone, he gives the sentence and stalks off. No one disputes what he says at that point.

The setting is pseudo-modern, with a DJ for the ball, encased in a glass tube that at times houses a rather voluptuous Virginia Mary for the scenes with Friar Laurence (a weary, yet kindly, Ron Menzel), a modern, half-moon, lighted bar, and those aforementioned loungers. The dancing at the ball is an odd form of formal dance forms reminiscent of court dancing and something a bit reminiscent of the movie, A Knight’s Tale. The set is designed by Dane Laffrey and the attention to detail is meticulous. The costumes, by Kaye Voyce, (all black for the Capulet faction and more mufti for the Montague supporters) are effective at immediately delineating who belongs to what side. Juliet’s all-white ensemble for the ball deftly signals her youth and ripeness and innocence and underscores the terrible growing up this most privileged and sheltered of daughters will have to do very soon.

Directed by Alan Paul, the show moves briskly; the overall feeling is one of fleeting, turbulent youth, looking for something bigger than themselves to claim allegiance to. One wishes these young wolf packs had had something to aim for with all that restless intelligence and yearning.

The show is a pleasure and a wonderful way to spend an evening (or matinée). It doesn’t break new ground in this often-produced play, but it is sharp, stylish and a roller-coaster of emotions.

Running Time: About 2 hours and 40 minutes with a 15-minute intermission; Act I is about 1-1/2 hours and Act 2 is roughly one hour.