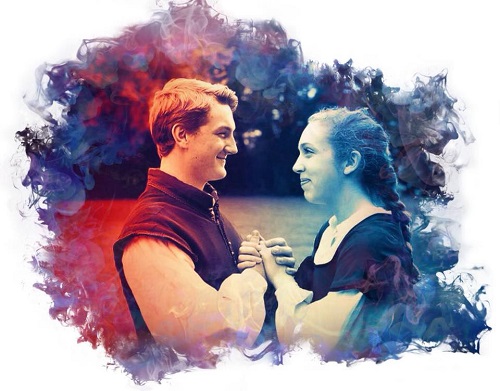 Shakespeare’s plays are considered classics, written hundreds of years ago and yet perfectly fitting to the events of today. They make us laugh, cry, and think about our world in a different way. “Romeo and Juliet,” staged at Historic Saint Mary’s City by Newtowne Players in partnership with the St. Mary’s County Art Council, is no exception. These three theatrical and artistic groups came together to deliver an impactful performance of this timeless Shakespearean drama, and did it entirely outdoors! Yes, it’s Shakespeare in the Park, and this one is fantastic!

When I set foot on the Historic Saint Mary’s City grounds, I felt as though I was stepping back in time to the 17th century. What a perfect setting for “Romeo and Juliet,” I thought, as I set up my camping chair in front of the old Statehouse. Yes, the play was set on an outdoor stage, and chairs/blankets were recommended for seating comfort, but not provided (although they’d rent you one if you needed it!) Also, be sure to bring along some snacks and don’t forget your bug spray! As the sun set and the clock approached 7:30, the views alone of the river and the historic sites were indescribable, and then the play began.

…brilliant balance of comedy and tragedy…

“Romeo and Juliet” is the story of two young lovers who must break past the feud held between their families, the Capulets and the Montagues, in order to truly express their love for each other. Sadly, this feud unites them in a way none could’ve ever expected.  In some ways, the show reflects the things of today; how society’s standards or troubles between groups can separate those with innocent and good intentions. Sometimes it takes the beauty of our world being destroyed for those involved to realize just how lost they really are.

First, I must congratulate the tech crew on a few things. I spent the entire show trying to figure out how they miked the cast, it was so fluid and seemed to move with the actors even though they were not wearing any visible mics. I also must praise their flexibility, moving the entire set up underneath of the tent when a storm threatened the show right before intermission. In about 20 minutes, they had completely transferred the entire set and all of the sound/lights equipment under the tent and were ready to perform Act 2. Kudos to this talented crew!

The show itself was a brilliant balance of comedy and tragedy, featuring faces both old and new to Newtowne’s stage. Colin Maher (Romeo) was captivating, capturing the chaotic struggle between young love and society’s division with ease. Breanna Lemerise (Juliet) was endearing, balancing her sweet innocence perfectly with the heaviness Juliet must possess for the show to end as it does. Both simply rolled the Shakespearean language off of their tongue with an ease that would make professional actors green with envy. I cannot speak enough praise for the incredible performances given by this cast. Stephanie Taubert (Prince) delivered her lines flawlessly, with a poise that adds some sense to the constant conflict in this piece. Sharol Buck (Nurse) was a brilliant comic relief but stunned me with her switch from comedy to grave sadness that was so sweet that I was in tears. John Giusti (Friar John), Jeff Maher (Lord Capulet), and Mikel Lauren Proulx (Lady Capulet) each brought characters to the stage that were effortlessly flawed and beautifully complex. Indeed, under the careful direction of Beth Sanford, this cast delivered such a performance that I forgot they were an amateur theatrical production.

The show featured an original score composed by Hunter Martin, which was a really neat addition to the piece. It simply flowed into the dialogue and was especially fun during the sword fights. Kudos to Mr. Martin for his creative ability and also for directing the 6 piece orchestra while playing the keyboard and keeping one eye on the weather.

The costumes were beautiful! Debbie Watson did a marvelous job capturing the feud between the Capulets and Montagues in their attire, while also depicting status and class. My favorite costume was Lord Montague’s outer coat, which featured nearly 50 pewter buttons! What a sight! As mentioned before, the crew for this show went above and beyond to ensure that the performance went on without a hitch. I was truly impressed with the fight choreography, developed by Russell Therrien; it didn’t feel rehearsed in the slightest and flowed naturally on the stage.

“Romeo and Juliet” has been performed time and time again, and features an English spoken long since forgotten in this day and age. However, this story never ceases to find application in this world, nor does it fail to deliver a tale that will delight a diverse audience. HSMC, NTP, and SMCAC’s production of “Romeo and Juliet” will provide you with a delightful evening of laughter and tears. The only question left to ask is what night are you going?

Advisory: Swordfighting with real swords, and themes of love, suicide, and death. Best suited for audience members 8 and up.