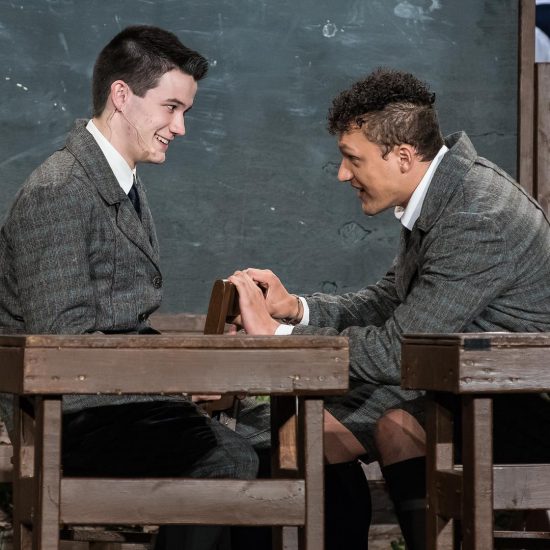 “Spring Awakening” is a German play from 1891 by Frank Wedekind which stands at the forefront of modernist drama. Improbably, this dark tragic work was turned into a successful Broadway musical in 2006. The current production by the Small Town Stars Theatre Company currently playing at the Carroll Count Arts Council in Westminster, Maryland, directed and choreographed by Miranda Secula, preserves both the original play as well as the format and cultural considerations required for the American musical.

I recommend warmly this production…

The play involves the friendships of young people – the girl Wendla and the boys Melchior and Moritz stand out as main characters. All live in provincial Wilhelmine Germany of 1891 in a milieu similar to the recent film “The White Ribbon.” Here the characters and the viewers confront topics – most taboo for the time – such as teen suicide, sex, homosexuality, school bullying, domestic violence, and brutality in a school system with an over-reliance on testing. The play was not only daring for its time but can still generate controversy in its frank discussions and presentations of these topics on the stage. It should be stated at the outset that this is an R-rated performance! Yet this production does not rely on mere shock value but instead encourages thoughtful reflection of our own experiences today with these topics in our own society.

All the cast is wonderfully convincing in its performances, especially the sensitive underachiever Moritz, as played by Zyphyr Henderson. Julia Creutzer is in strong and plaintive singing voice as Wendla, as for instance in the first song “Mama Who Bore Me” and in “Whispering.”

When it comes to music, the live band is to be singled out for special praise, especially Luis Montes as conductor and guitarist. “Spring Awakening” as written makes a cumbersome juxtaposition between the modern rock musical of our era belted out by characters dressed and acting as if they are in 1800’s Germany. The production wisely softens this slightly in the opening number, with the souful cello of Aaron Furry and the glockenspiel (presumably by percussionist Jeb Cliber), so as to build slowly into the rock aspects of the play. The sound mix between instruments and singers is excellent.

The stage is simple, but effective, with effective lighting and background colors (such as the purple screen in “The Song of Purple Summer.”) The costumes are authentically 1800’s, and are even worn by the orchestra, ever visible behind the players. Adding to the authentic detail: Two characters even have haircuts like Max and Moritz, two cartoon characters by early comic artist Wilhelm Busch popular in this era in Germany. Occasionally modern colloquialisms break the period mood, in phrases such as “What have you been up to?”

This mixing of the fin de siècle German world with modern US culture lies at the crux of every production of “Spring Awakening,” and this production handles this well. The ending of the original play is dark and inconclusive, but this is changed somewhat for American tastes, for musicals are usually expected to have hopeful endings! A nice touch of this production is when characters shed the restrictive nineteenth-century clothing and even brandish hand-held stage microphones, even while sitting at school desks!

Those knowledgeable about German culture may enjoy additional allusions through the garden-like staging to Goethe’s “Faust” (which the children “Spring Awakening” are discouraged from reading!), for in a garden Gretchen is seduced, much like Wendla. We have made a “secret bargain with our open devils,” says one character in “Spring Awakening,” reminding us of the universality and timelessness of Wedekind’s play turned musical. I recommend warmly this production, which runs through August 5.

Running Time: 2.30 plus hours with intermission.