Theatre Review: ‘The Bridges of Madison County’ at Keegan Theatre 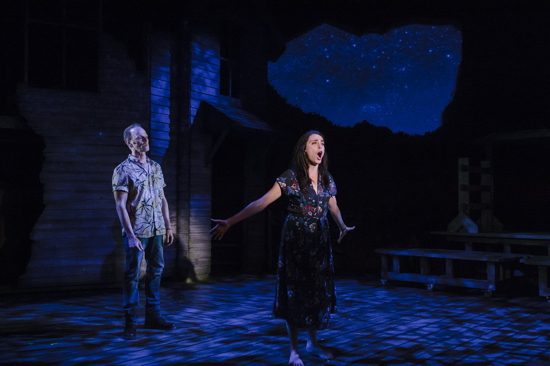 Dan Felton and Susan Derry as Robert and Francesca in The Bridges of Madison County, now playing at Keegan Theatre. Photo by Cameron Whitman.

One thing leaps out right away at the Keegan Theatre’s production of “Bridges of Madison County”—this is one of the most gorgeously sung shows of the season. Led by the impeccable Susan Derry as Francesca Johnson and Dan Felton as Robert Kincaid, the music is at times transcendent. Derry sings with her usual power and clarity and makes those high notes sound easy, and Felton’s voice has a depth and resonance that makes his character come fully alive.

…’Falling Into You’ is show-stopping in its full, operatic glory.

Derry’s and Felton’s voices also blend beautifully when they sing a duet; neither dominates the other, but there is a give and take in the singing that brings to life what their partnership could possibly have been in a different place with different responsibilities. Their duet at the end of Act 1, “Falling Into You” is show-stopping in its full, operatic glory. It would be lovely to believe that love can conquer all, but it can’t, it doesn’t, and so continues with, shall we say, different fulfillments.

And of the cast, two of the most delightful are the nosy neighbors, Marge and Charlie (played by Kathy Fuller and Paul Tonden). They are funny and sharp and show a surprising amount of grace and compassion in their interactions with their neighbors, particularly for Iowa in the mid-1960s, a time when people there were ready to call the sheriff if a “hippie” was spotted. Francesca is an Italian who came to the United States as a war bride and is now having an affair with a National Geographic photographer—but they not only protect her secret, they don’t ask/demand anything of her in return.

The story revolves around a brief, incandescent love affair between Francesca Johnson, an Italian war bride living in Winterset, Iowa in 1965, and Robert Kincaid, a photographer for the National Geographic who has traveled from Washington state to photograph the famous covered bridges of Madison County. Unable to find the seventh covered bridge, the Roseman Bridge, he pulls into the driveway for directions. Francesca’s husband, Bud (Chad Wheeler), rebellious 16-year-old son Michael (Carson Collins), and daughter Carolyn (Lily Warner), along with the prize-winning steer, Stevie, are away for three days to attend the Iowa State Fair, where Carolyn and Stevie are competing for Steer of the Year Award. This is the first time in 18 years that Francesca will have time to herself to read, draw, just dream and remember Napoli and her family and life there—three whole uninterrupted days. Then Robert Kincaid stops and asks for directions, and a lifetime is lived in those three days.

Based on Robert James Waller’s 1992 novel, with a book by Marsha Norman and music and lyrics by Jason Robert Brown, it’s first run was at the Williamstown Theatre Festival in August 2013. It premiered on Broadway on February 20, 2014 and closed on May 18, 2014. The musical won the 2014 Tony Awards for “Best Original Score” and “Best Orchestrations.” This production is directed by Kurt Boehm.

While the music is glorious and the acting as professional as one would expect, the book is still a bit problematic. One never fully gets the sense of why Robert is so smitten with Francesca (other than that in Iowa in 1965, she must have been rather exotic); one doesn’t fully understand why Francesca came to the United States as the bride of a soldier she was not in love with. Equally problematic is the part of her husband, Bud (Chad Wheeler); he is a taciturn man who fell in love with the beautiful Italian girl and married her—all perfectly plausible—but then he suddenly erupts into violence against his son. Maybe it was displaced fear and anger at what he suspected his wife of doing, but it seemed to come out of nowhere.

The set is a bit jarring—it looked more like a sharecroppers shack than a Midwestern farmhouse and yard. While the family is not at all rich, they have enough money that they can take 3-4 days off from the farm, take the steer raised by their daughter in 4-H to the state fair (and stay in motels and eat at restaurants and go to bars) and Francesca can go buy a new dress on a whim (somewhat awkward scene—the dress-buying happened in front of the stage on the main floor and looked more like an illegible substance transaction). However, the costumes by Alison Samantha Johnson were evocative of the period and really lovely.

The cast is beautifully supported by a nine-piece orchestra under the direction of piano/conductor Elisa Rosman. It’s always a pleasure to hear a musical with a live orchestra and given that there were still some sound issues, it helped to divert attention from them.

The music makes this show, and this cast sang the score beautifully. It is music made for voices with a wide range and all of them, and Derry and Felton, in particular, met and surpassed this bar with ease.

Running Time: About 2 hours and 15 minutes with a 15-minute intermission.