Theatre Review: ‘The Little Mermaid’ at Cockpit in Court 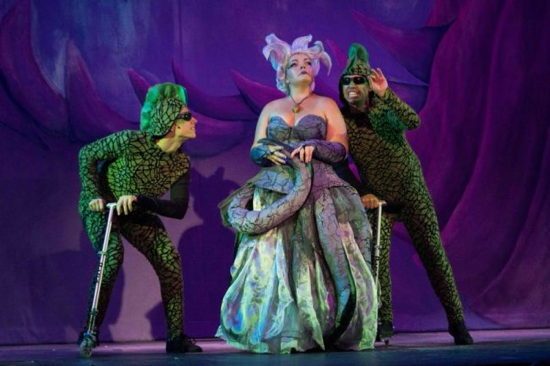 Cockpit in Court, the theatre company housed on the CCBC Essex campus, has scored another hit with their production of “The Little Mermaid.” If Disney musicals are your thing, this one will definitely satisfy.  If they are not, then go see it anyway, because there are a ton of fun elements in it.

With music by Alan Menckin (who apparently has written more Disney musicals than anybody, along with the stage and movie hits “Newsies” and “Little Shop of Horrors,”) lyrics by the late, great Howard Ashman, and a book by Doug Wright based on the Hans Christian Anderson story, this imminently hummable tune-fest has become a staple on local production stages.

“The Little Mermaid,” for those of you recently arrived on the planet, is the story of Ariel, the daughter of King Triton.  Ariel longs to be a real human, never more so than when she sees the gorgeous Prince Eric sailing the high seas with his crew.  The evil and magical Ursula, Ariel’s aunt, wants Ariel’s beautiful voice.  She’s willing to strike a trade – Ariel’s voice for legs and a chance to be a real human.  Ariel goes for the deal, meets the Prince and things don’t go quite as planned.  It’s a Disney fairy tale, so you know it’s all going to work out ok, but it’s still fun to watch if you’re a fan of the genre.

Directed with a sure, steady hand by Jillian Bauersfeld, the production moves along at a generous clip even during some rather pedantic scenes.  Andrew Worthington leads the excellent orchestra, keeping the up-tempo numbers bubbly and the ballads just slow enough.  Karli Burnham does some inventive choreography, employing ribbons and other fabrics generously to create the illusion of moving water and general “joie de vivre” during some lively dance numbers.  Thomas Gardner does an excellent job with the lighting, evoking the undersea feel with subtle blues and greens, and brightening up the land portions to just the right degree.  Deanna Brill’s costume are delightfully appropriate, especially on Scuttle the Seagull and his flock of dancers.

If Disney musicals are your cup of tea, you’ll find this production of ‘The Little Mermaid’ perfectly sweet.

The chorus handles all of their business with efficient proficiency, especially the dance numbers and play a number of supporting roles quite well.  The axiom that there are no small roles fits this production to a ‘T’.  The ‘T’ stands for ‘Triton.’  Mark Lloyd is commanding and regal with a fine baritone as King Triton, Ariel’s father.  One of the highlights of the show is in the second act, when Chef Louis, hilariously played by Brian Jacobs, brings a real star turn to his number, “Les Poissons.”  Gary Dieter never fails to prove why he is held in such high esteem by the entire Baltimore theatre family.  As Scuttle, he struts and flaps to new, feathered highlights.  His comedic timing is flawless.

Derek Cooper’s take on Sebastian, the Jamaican crab is absolutely delicious.  He’s funny as can be and also imparts just the right amount of gravitas when the role calls for it.  He may well be the hammiest crab in the bunch and we love him all the more for it.

Holly Gibbs is fabulous as Ursula, the mean ol’ octopus/sea witch.  With a voice as big as Merman’s (and I don’t use the comparison lightly) she is menacing, smarmy, and slick – exactly what the role calls for.  Her costume is spot on, but I would have liked to see more play with the tentacles.

Jim Baxter as Prince Erik is as picture-perfect as any Disney Prince should be.  This rather one-dimensional character is brought to life with a smooth finesse by a well-seasoned performer.  With his classic good looks, Baxter fits the role very nicely.  And Alison Comotto is just lovely as Ariel. With a terrific belt and a great figure, she is the epitome of the Disney Princess.  Her wide-eyed, innocent expressions are exactly what the role calls for and on her solos like “The World Above” and “If Only” she is absolutely charming.

If Disney musicals are your cup of tea, you’ll find this production of “The Little Mermaid” perfectly sweet.  If they’re not, then see this one and get ready to change your mind.