Theatre Review: ‘The Pirates of Penzance’ at Olney Theatre Center 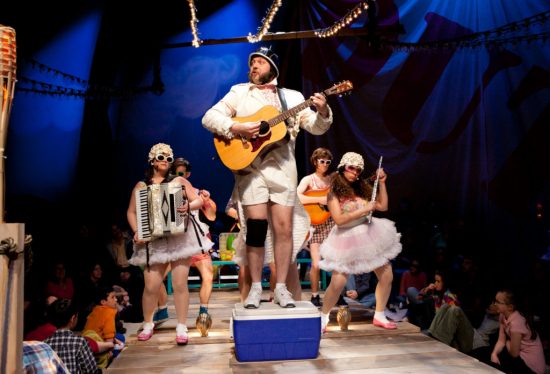 Matt Kahler (Major General) and the cast of The Hypocrites’ The Pirates of Penzance at Olney Theatre Center (Photo: Evgenia Eliseeva, courtesy of American Repertory Theatre)

“The Pirates of Penzance” have set shore in the unlikely enclave of the Olney Theatre Center.  The touring troupes The Hypocrites and The House Theatre of Chicago, both based in the windy city, have collaborated to bring this condensed production to Olney’s intimate ­Mulitz-Gudelsky lab space, a repeat tour for these fun-loving young professionals who are quite proficient in this niche and imprint their own zaniness to this classic work. Operetta light?

…the chance to expose youngsters to this is priceless.

Realize that this isn’t your father’s children’s theatre—it is several levels above “Row Your Boat” or even “James and the Giant Peach.” Ambitiously tackling the masterfully complicated wordplay and the rollicking score of Gilbert and Sullivan’s operetta, this show immerses both adult and child in the wonder of theatre – for the first time, or for a unique experience. Replete with beach balls.

This version of “The Pirates of Penzance” is a lighthearted labor of love with a great musical cadence that avails itself well to the quick prattle complex silliness on exhibit here. Instead of swashbuckling period costumes, actors in ‘Godspell’-like casuals and 80s short shorts, bouncing around with happy faces and engaging attitude. Front and center is a promenade where patrons can sit or quickly move, depending on the action in front of them. Aerobic performance theatre!

So you know what the show is really about, a quick recap:

There is Frederic, our hero, the righteous “slave of duty.” This innocent youth was erroneously apprenticed to a pirate in a crew by Ruth. She’s the silly nanny who thought that it was his parents’ wish that Frederic be educated as a “pirate,” not “pilot. And despite a quarter-century age difference, she lusts for her charge.

Frederic vows to wipe out the pirates. Then he suddenly discovers that this 47-year-old harridan has deceived him about her youth and beauty. This is caused by the arrival of a trio of singing beauties–the many daughters of Major-General Stanley.

He must kill the Pirate King and his buccaneers — until a surprised Frederic discovers that he was born on February 29th, which, arrrgh! keeps him in their ranks for the next 63 years.  So, now that the plot is clear, throw it away and enjoy the revelry. It’s really the connection with the audience by this talented group of young actors that really shines. All are extremely talented singers that play various instruments including a lute, guitar, accordion, musical saw and audience-led percussion, all with coordinated movement.

Standouts include the immensely likable Mario Aivazian as Frederic, Shawn Pfautsch as a Pirate King of impressive vocal range, and Matt Kahler who gives a rousing rendition of the classic “Major General Song” in a decidedly new twist, pattering along and supplying a clarity of lyric in a very challenging piece.

Directed and co-adapted by Sean Graney and Kevin O’Donnell, this is an example that works of this nature can be given to a young audience and not dumbed down.  Everything may not have been caught as in the original intent, but the chance to expose youngsters to this is priceless.

Running Time: 80 minutes with a one-minute intermission. (just go with it).