Concert Review: ‘On the Waterfront’ at National Philharmonic Orchestra 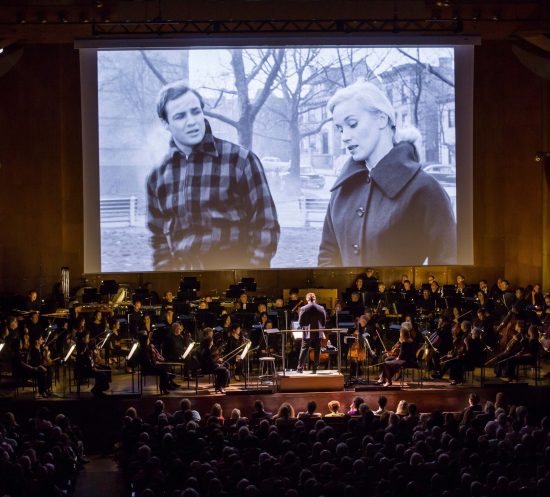 As the winner of eight Academy Awards in 1954 including Best Picture, and holding the position of No. 8 on the American Film Institute’s top-100 list, the inclusion of “On the Waterfront” amongst the all-time greatest motion pictures is certainly warranted. Based upon Budd Schulberg’s novel “What Makes Sammy Run,” it explores the rampant corruption present in the New York longshoremen’s unions during the 1950s.

…the overall experience was enjoyable and the quality of ensemble was evident.

The plot centers around Terry Malloy (Marlon Brando), a former prize-fighter given the opportunity to rise within the ranks of the mob controlling the local union. However, through the influence of local priest Father Berry (Karl Malden) and Edie Doyle (Eva Marie Saint), sister of a dockworker who was murdered for testifying against the corruption, Malloy is faced with the dilemma of pursuing the spoils of working for the mob, or succumbing to Berry and Doyle’s urging to do what is right and testify against mob boss Johnny Friendly (Lee J. Cobb).

The score is Leonard Bernstein’s only original for film and masterfully captures the somber, tragic, violent, and romantically touching elements. Rather than opening with the texture of full orchestra, Bernstein cues the first few minutes for solo horn, joined gradually by flute, trumpet and others. If the intention is to hint at the inward crisis faced by Malloy, the gesture is certainly effective. Much like the wild brashness of his music in parts of “West Side Story,” Bernstein’s rhythmic and dynamic treatments of “On the Waterfront’s” skirmishes heighten the drama significantly.

The National Philharmonic Orchestra is a bit of a hidden gem in the DC music scene with their small season and geographic proximity to higher-profile ensembles. But their ranks are flush with some of the area’s best players and, along with Music Director Piotr Gajewski, they consistently give solid performances of core repertoire. On this evening’s program, solo lines from principal winds and brass were of special note.

Despite all these spectacular ingredients, the composite produced was not entirely convincing, primarily – perhaps even singularly – due to the way in which amplified sounds competed with one another in the live space. The orchestra was amplified with an array of microphones scattered amongst the players. Their sounds were then filtered through the same amplification as the film’s audio track, which given the age of the film, was perhaps not so simple to isolate and extract without altering of quality. The result was cloudy and inarticulate. The subtitles on screen proved necessary and it would have been equally helpful to have had a copy of the conductor’s score to help discern the orchestration. The liveliness of Strathmore’s acoustics only compounded the issue. Though the intent may have been to balance the volume of the dialogue with that of the orchestra, it only made listening and discerning difficult.

Still, even given the disappointing decisions with amplification, the overall experience was enjoyable and the quality of ensemble was evident. These “film with live orchestra” events are becoming increasingly popular and are a wonderful way for orchestral music lovers to enjoy a lighter evening, as well as an excellent gateway for exposing new audiences to the joys of live performance. This likely just being a hiccough in the process of discovering what does and does not work in the merging of mediums, it would be welcome to see programs of this type on future seasons of the National Philharmonic Orchestra.

Running Time: One hour and fifty minutes (no intermission).

Advisory: “On the Waterfront” is not rated in the United States but contains scenes of moderate violence and mild gore.

For more information about the National Philharmonic Orchestra, click here. For more events at the Music Center at Strathmore, click here.