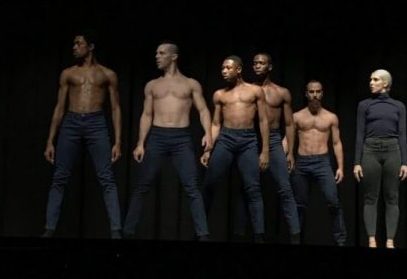 Performers in BAD BOYS OF BALLET “A Quiet Place” by Adrienne Canterna. Photo by Leila Mire.

Maryland Concert Series Season Opening Gala featuring the “Bad Boys of Ballet” has a little bit of something for everyone. The twenty-five piece show demonstrated the talents of local dance studios with performances by America’s Got Talent semi-finalists, “Bad Boys of Ballet” as the featured act.

The dancers’ swagger and coolness is one that many companies may try but few can pull off.

The “Bad Boys of Ballet” complimented the show tremendously with a contagious energy and playfulness that was palpable throughout the audience. The dancers’ swagger and coolness is one that many companies may try but few can pull off. The women’s flashy costumes besides the men’s bare chests were enough for any audience to whoop, holler, and swoon over.

The first act featured works by both Adrienne Canterna and her sister, Ashley Canterna Hardy (who also teaches in the area) to represent the “Bad Boys”. Adrienne Canterna and the BAD BOYS first piece of the evening was “A Quiet Place” featuring guest performer, Morgan Rust from the Washington Ballet. The piece began with a lyrical solo by Rust, interrupted by the energy and athleticism that are a trademark of Canterna’s company. Each of the male dancers was spotlighted individually to show off their acrobatic tricks and style.

Following a fifteen-minute intermission, the show resumed with works showcasing choreographers and “Bad Boys” dancers, Alicia Canterna and another work by Ashley Canterna Hardy. The night also presented “Bad Romance,” a solo performed by Adrienne Canterna with choreography by John Ole Olstad. Canterna looked the part of Lady Gaga with her bleach blonde hair and costuming that screamed Gaga. The piece’s unique musicality was interesting and a refreshing shift in a show that was otherwise heavily ensemble-based.

The final “Bad Boys” performance of the evening was excerpts from Rasta Thomas’ “Rock the Ballet.” While the show was not so much an innovative, cerebral piece, it satisfied the audience’s desire for entertainment. Most notable were the male solo moments where the performers were able to show off their dazzling tricks and stage charisma; thus making the mother’s in the audience sigh while the father’s shifted uncomfortably in their seats.

All in all, the “Bad Boys of Ballet” was an excellent choice to feature in the gala performance. Given the high school audience, it was a palatable and entertaining company for aspiring entertainers to share the stage with.

Professional performer, choreographer, teacher, and writer in the DMV area.