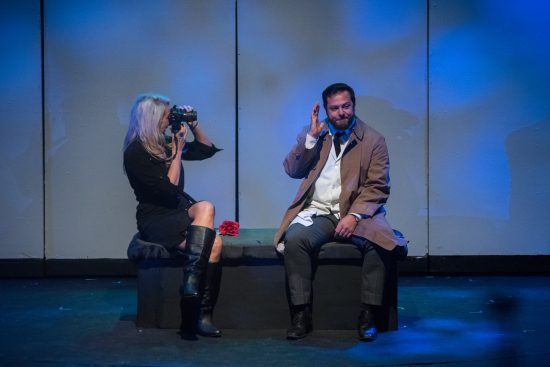 “Closer” at The Cumberland Theatre.

The Cumberland Theatre is proud to present Patrick Marber’s award-winning play, “Closer” as the fifth installment of their 30thAnniversary Season.  Taking a drastic turn from the last two productions presented at the theatre (July’s sold out “Mamma Mia!” and August’s comic farce, “Noises Off”), “Closer” is an intimate portrait of lust and betrayal told through the eyes of four people with drastically different outlooks on life and love.

Since its successful debut in 1997, “Closer” has been performed throughout the world in over 200 countries in 30 different languages.  It won the Obie Award and the New York Drama Critics Award and received a Tony Nomination for Best Play following its Broadway opening.  It was adapted into a critically acclaimed film in 2004 starring Julia Roberts, Jude Law, Clive Owen and Natalie Portman.

“We rarely get the chance to produce plays like ‘Closer’,” said a theatre spokesperson.  “It is definitely risky to put such raw and edgy material on the stage.  But we hope audiences will take this opportunity to step out of their comfort zone and experience this powerful play and the fine performances of our talented cast.”

“Closer” chronicles the lives of four people in twelve intense scenes spread over a four and a half-year time span.  Anna, a photographer, who is recently divorced, Larry, a dermatologist, Dan, an obituarist and failed novelist, and Alice, a stripper and self-proclaimed waif.  Love affairs, seductions, lies, rivalries and betrayals play out as the characters struggle to find intimacy and security while still satisfying their inner most desires.  It is intended as an emotionally intense journey to be felt by both the actors and the audience.  A critic at the New York Magazine claimed, “‘Closer’ does not merely hold your attention, it burrows into you.”

Playing Larry and making his Cumberland Theatre debut will be New York based actor, Nathaniel Kent.  Originally from the Bay Area of California, Kent has appeared in a variety of roles in theatres throughout the U.S. and Canada.  Also making his CT debut will be Rob McDermott, playing the role of Dan.  Originally from Dublin, Ireland, McDermott has toured with award-winning plays to Germany, England, Portugal, Romania and L.A..  He currently resides in New York City.

The roles of Anna and Alice will be played by Kimberli Rowley and Savannah Humbertson.  Rowley is the Co-Artistic Director of the Cumberland Theatre and was last seen on stage as Belinda in Noises Off and Tanya in “Mamma Mia!.”  Humbertson has performed with many groups throughout the area and was last seen in “Gypsy” and “Mamma Mia!.”  “Closer” marks her first starring role with the Cumberland Theatre.

“Closer” is being directed by veteran actress, Nicole Halmos.  A graduate of Carnegie Mellon, Halmos resided and worked as a director, acting coach, professional actress in New York City for over 20 years.  Her recent local stage appearance include Rose in “Gypsy,” Margaret White in “Carrie the Musical,” Fraulein Schneider in “Cabaret” and Mother Superior in “Drinking Habits.”

“Closer” is being presented now through September 23rd with Thursday – Saturday performances beginning at 8:00 pm and Sunday matinees at 2:00 pm.  An opening night party will be held in the theatre lobby following the Friday, September 14thperformance.  The party is included in the ticket price and includes complimentary food, beverages and a chance to meet the cast and crew.  Tickets can be purchased at www.cumberlandtheatre.com or by calling the theatre at 301.759.4990.  The VIP Starbox with prime seating, food and beverages for eight (8) people is also available to book.