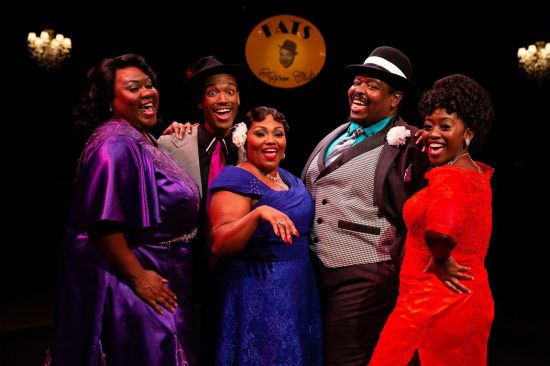 If autumn has you feeling nostalgic, you’ll definitely want to head to Toby’s Dinner Theatre for the Fats Waller musical revue “Ain’t Misbehavin” directed by Monique Midgette. Featuring snazzy jazz tunes from the 1920s Harlem Renaissance, this show doesn’t have a storyline but is a song-and-dance extravaganza of the famous jazz musician’s sultry, silly, and sometimes naughty melodies put on by five talented performers in a vintage nightclub atmosphere.

… treat yourself to a beautiful night of jazz…

Kelli Blackwell, Kadejah Oné, Bryan Jeffrey, Tobias A. Young, and Kanysha Williams will delight you with their impressive vocal mastery. I appreciated how each singer varied their individual vocal style throughout the evening to bring out playful details in the songs, seduce the audience with strong emotions, or belt out a powerful climax. Their masterful manipulation of technique kept the show feeling fresh and exciting and kept the audience’s interest throughout each number.

Unfortunately, the soundboard mix needed to be adjusted because while the vocalists were clearly enunciating (as evidenced by the fact that every word could be understood on a solo with piano accompaniment), I couldn’t understand many of the song lyrics when all five singers were performing or when they were backed by the full band instead of just the piano.

The background singers were as loud as the primary vocalist in the mix and the instruments were all turned up too loud against the vocals and were overpowering the many clever lyrical twists and turns. I felt like I missed a lot of funny moments because of not understanding the words. Fortunately, the singers’ technique and expressive facial expressions, the catchy tunes, and the charismatic choreography were enough to keep me engaged, but I would love for the audience to get the full experience of the show by understanding all of the words too so let’s hope that the theatre can work out the kinks in the sound booth.

One of my favorite numbers was the sultry song “Honeysuckle Rose” performed with intensity by Tobias A. Young and Kadejah Oné. They were followed by Kelli Blackwell singing “Squeeze Me” and her technique and mastery left the audience feeling just as powerfully moved as we had been in the previous number, no easy feat!

All of the characters were expressive dancers, but I especially enjoyed Bryan Jeffrey whose dancing was featured prominently in the Act II number “The Viper’s Drag.” Cast member Kanysha Williams also stood out as a dancer with Jeffrey on the swing dance number “How Ya Baby” in Act I and Oné brought the house down in Act II with her powerful solo “Mean to Me.”

The vintage costumes by Costume Designer Janine Sunday were fabulous and elegant and perfectly captured the era. I especially loved the touch of the added fancy accessories in Act II. Choreographer Shalyce Hemby has done a wonderful job with dancing that fits the songs without overpowering them while still indulging us with a few special dance numbers to feature her talented cast and get the audience’s excitement up.

Of course, Toby’s features a dinner and dessert experience before the show and you’ll be waited on by your cast members as well as other theatre staff. Remember that tips are not included in the price of your dinner and show tickets and that your tips are their wages and allow them to bring you your night’s entertainment while making a living, so Toby’s encourages you to tip generously, but at least 15% of your combined show and dinner ticket plus bar tab. (Alcoholic beverages are available as an additional purchase but not included with the meal ticket.)

Overall, “Ain’t Misbehavin” is a wonderfully enjoyable night of music and dance and I recommend that you treat yourself to a beautiful night of jazz by attending this Toby’s Dinner Theatre performance.

Running Time: 2 hours, with one intermission. Dinner precedes the show for an additional two hours.

Advisory: There are a few naughty lyrics and one song is about drugs, so use your judgment in taking children.