Theatre Review: ‘Around the World in 80 Days’ by the National Players at Olney Theatre Center 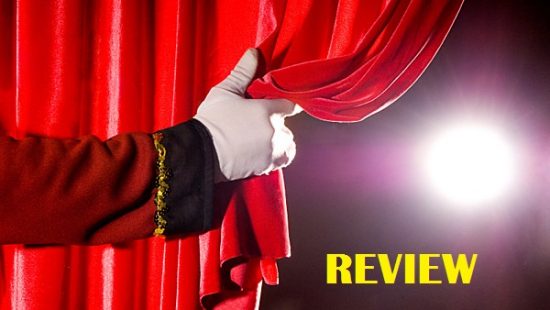 Just about the time you’re thinking there’s nothing new in the land of the lively arts, along comes something unexpected and wholly different. Celebrating its 70th touring season kick-off last night, National Players took us on a wild, whacky ride in “Around the World in 80 Days” at historic Olney Theatre Center. And we didn’t have to leave our comfy seat in the Historic Theatre for this high-tech, fast-paced romp by Laura Eason based on the novel by Jules Verne and directed by Jared Mezzocchi (also is credited for the fabulous video projections).

It’s enough to renew one’s faith in the world’s artistic future, though there are only a few local viewings of this rendition before the Players take off on their own journey across America. “Around the World in 80 Days” returns next May in a repertory program with William Shakespeare’s “Twelfth Night.” Look for special events and the company’s popular “Pay-What-You-Can” shows.

A visit to the Olney Theatre Center can be its own adventure. Best to arrive early and have a pint across the street at the old Ale House or in the intimate lounge bar, adjacent to the Main Theatre and the Historic Theatre up the stairs. Or spend sometime before curtain in the woodsy area that surrounds three theaters and old barn. It was especially lovely last evening to wander through the lobby before the show, then to join the cast in a post-performance reception.

Portraits of Father Gilbert V. Hartke and William Graham are placed prominently in the lobby to remind us of their vision and commitment to America’s longest running touring company, founded in 1949 and based at the Olney Theatre Center. Players’ alumni include actors, directors, and designers working on film, television and hundreds of stages across the country.

“We’ve planted seeds all over the country…but our home is based here,” said Artistic Director Jason King Jones, acknowledging local alumni in the audience just before curtain. Actually there was no curtain on the stage-within-the-stage designed by Charlie Calvert, with lighting by Sarah Tundermann, and sound by Roc Lee, all tech wizards. He then told us to turn off our cell phones as “There’s so much technology in this show, no need to add to the visual overload.”

Players is a 10-member ensemble that takes on multiple roles in “Around the World in 80 Days,” as they do in all their shows. So it was off to the races with aerobic activity, stage directions, walks and talks, and all kinds of tricks – loved how one Player threw a cane through the screen that was magically caught by the protagonist.

We first meet Phileos Fogg (Josh Bierman) at his London flat as he discharges his manservant for not making the correct tea. Bierman’s Fogg is all British stiff-upper-lip mannerism, but you soon learn that he has a heart for the underdog and a deep yearning for a relationship. Enter Passepartout (David Reece Hutchison) who barely has time to start his job as the newly hired manservant before learning that his boss has made a wager to prove he can travel around the world in 80 days at once. For the record, the wager was 20,000 pounds (worth a few million today). Obviously they took off right away.

They traveled by boat, train, and an elephant in this epic adventure where Fogg picked up a few traveling companions, including his foe Mr. Fix (Benjamin De Camp Cole) and his newfound love interest, Mrs. Auoda (Deidre Staples). Kudos to this fun-loving ensemble for a delightfuf trip with its daring rescues, dumb duels, buffalo encounters, a moonlit romance, a surprise ending and more.