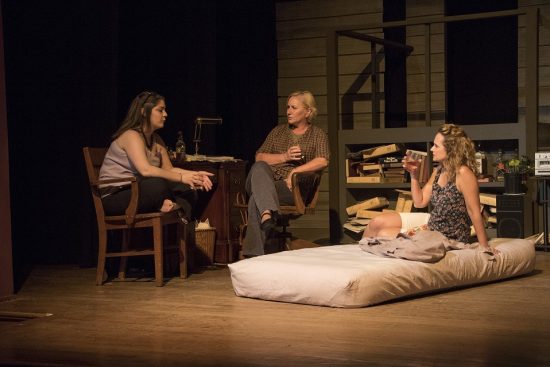 “There are few people in the world whom I love, and even fewer of whom I think well.” These sentiments, expressed by Austen heroine Elizabeth Bennett, accurately describe the complex dynamic of familial love. In “August: Osage County,” now playing at The Little Theatre of Alexandria, these bonds are stretched to their breaking points.

This Tony Award and Pulitzer Prize-winning play opens on the patriarch of the Weston clan, Beverly (Fred C. Lash) interviewing a local Native-American woman, Johnna (Katarina Frustaci) to become their housekeeper. You are soon introduced to the primary reason why their home needs someone in this position; Mrs. Violet Weston (Diane Sams.) She staggers into the room, slurring her words and exhibiting violent mood swings. Suffering from cancer and hooked on pain pills, she cuts a dramatic figure.

…a cohesive and affecting production of a complex piece of theatre.

When the next scene opens, Beverly has disappeared and has not been heard from in 5 days. Violet’s sister Mattie Fae (Gayle Nichols-Grimes) and brother-in-law Charlie (Tom Flatt) come to help, as well as the middle of the three Weston daughters, Ivy (Carlotta Capuano), who works at the nearby college. Slowly, more people start to trickle in including eldest daughter Barbara (Nicky McDonnell), her estranged husband Bill (Michael Fisher) and sullen teenage daughter Jean (Camille Neumann). They are followed by the youngest daughter, Karen (Elizabeth Keith) and her new fiancé, Steve (Eric Kennedy) and later by Charlie and Mattie Fae’s son “Little” Charles (Greg Wilczynski.) This very full house is rocked by the arrival of the Sheriff (Paul Donahoe) with tragic news. As the next few days unfold, dark secrets come to light, shocking truths are revealed, and the women of the Weston family discover what they are truly capable of.

At the center of the conflict are Violet and Barbara, whose relationship was always fraught and resulted in Barbara’s retreat from Oklahoma for Colorado. Barbara is in the incredibly difficult position of trying to seize control of the situation at hand, on top of being confronted with the crumbling of her own marriage. Pushed to the breaking point, she is horrified to realize just how much she has in common with her mother. McDonnell does a fantastic job portraying a complex character with dexterity and depth. There are times when she evokes a huge amount of empathy, and then her mother’s viciousness rears its head. Speaking of her mother, Sams is a tour-de-force in the role of Violet. She sometimes comes off as almost sickly sweet, or a pathetic victim, but danger was always near. It was often after these false moments of vulnerability that a violent wave of cruelty would explode like a hammer upon those around her. There was a scene in Act II where the whole family came together for an incredibly tense dinner, with Violet at the head. The complex situations and extreme tension of these scenes were incredible- it was a masterclass in ensemble theatre that this cast passed with flying colors.

As that scene intimates, the rest of the cast was also very strong. Casting this show is difficult that you need the right people to balance the comedy and drama of the show, and, being such a long show, the performers need to be able to carry it. Also, many of the characters possess traits or revelations that make them unlikable, which means the performances have to walk a fine line. This is most true of the characters of Bill, Jean, Steve, and Mattie Fae. Fisher has to try and provide support for a wife that he has left for a much younger student of his, and he does a fantastic job balancing his imperfect character. Neumann shows real vulnerability as Jean but also puts off the audience with her selfishness and drug use. Her ever-worsening relationship with her parents comes to a head one night after a horrifying near-miss, where all three actors shine in a difficult scene. Kennedy did an excellent job playing a slimy creep, and Nichols-Grimes was a true standout as Mattie-Fae; her bombastic performance for most of the show only made her devastating revelation in Act III all the more heart-wrenching. Keith played Karen with a kind of quiet desperation that inspired pity at first, but frustration later. And Capuano’s Ivy conveyed a long-suffering quality that inspired empathy until her denial over a terrible truth caused her to make a selfish choice.

With these characters, there is a lot of back and forth in the morality department. However, their situations are made more bombastic by the presence of some truly good-hearted characters. Flatt’s portrayal of Charlie was charming and sweet. He was a touching high point in a show full of the morally ambiguous. He stuck up for his son and often acted as the voice of reason. Also, his saying of grace at the aforementioned family dinner that was a comic gem. Wilczynski also delivered a sweet character as Little Charles, who was almost too sensitive and kind for this world. He delivered some hearty laughs and heavy empathy when made the butt of ridicule by his own mother. Donahoe cast a kind shadow as current Sheriff and former boyfriend of Barbara’s. Finally, Frustaci’s quiet and dignified performance was touching and beautiful, with a particular highlight being when she went after someone who really deserved it with a cast-iron skillet. This cast was remarkable – both individually and as an ensemble.

The set was also impressive to behold, as it acted as a metaphor; it is literally a house divided (set design by Dan Remmers.) Combined with the well-utilized lighting, it made for an amazing visual presentation (lighting design by Franklin Coleman.) Director Susan Devine should be commended for a cohesive and affecting production of a complex piece of theatre.

Running Time: Approximately 3 and 1/2 hours with one 15-minute and one 10-minute intermission.

Advisory: Extreme adult language and situations. Some occurrences could be triggering.

“August: Osage County” is now playing through September 23rd at The Little Theatre of Alexandria. For more information and tickets, please click here.