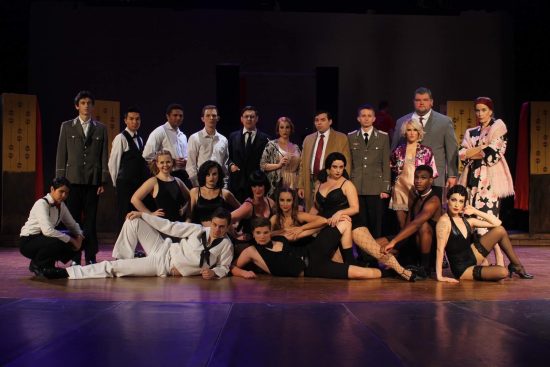 The cast of “Cabaret” at Fredericktowne Players. Photo by Grace Cassutto.

“Nothing is more difficult and demands more character than to find oneself in the public sphere in opposition to the trends of one’s time and to proclaim loudly:  ‘No!’”  So wrote the German-Jewish writer Kurt Tucholsky, bête noire journalist of the Weimar Republic.  Now being produced by the Fredericktowne Players, the musical “Cabaret” with its bright music yet somber social commentary explores this theme, and finds many individuals in 1930’s Berlin without character and without the ability to see the coming onslaught of the Nazi’s rise to power.

…nothing short of superb.

Directed by William Lewis, the play begins in a noir Art Deco setting suggesting the “Kit Kat Klub,” the cabaret club where much of the action and most of the music of “Cabaret” takes place.  Here we meet brash chanteuse Sally Bowles of Mayfair, on loan from the UK, as it were, to Berlin.  She is played to perfection by Robin Samek, who capatures Fräulein Bowles’ charisma, cheek, and charm as well as her English accent, even whilst singing standout pieces such as “Maybe This Time,” “Mein Herr,” and — of course – the show-stopping title song “Cabaret.”

We arrive in Berlin by train with Clifford Bradshaw, an aspiring writer from America who takes up residence (eventually with Sally) at the pension of Fräulein Schneider.  Clifford as acted by Danny Santiago has the “innocent abroad” look, though he is ever concerned about the Nazi’s continuing ascension to power, unlike the supposedly worldly Sally.

Those who know “Cabaret” exclusively through the 1972 Oscar-winning film version will be surprised that there is a very different subplot:  Fräulein Schneider, the middle-aged landlady, is courted in a charming way by Herr Schultz, a Jewish shop owner.  The question is whether she will show character as she finds herself in Tucholsky’s “public sphere in opposition to the trends of one’s time.”  In the meantime, she  (played by Nancy Illman) sings a lovely-voiced duet with an equally gifted Herr Schultz, with Brett Cassidy in the role.  He acquits himself  admirably in singing and is a wonderful actor for the part in terms of looks, warmth, and anger (“What am I, if not a German?!”).  Later Fräulein Schneider sings the morally ambiguous song “What Would You Do?” with great pain and poignancy.  If you know “Cabaret” through the film and do not recognize these songs and plot elements, it is all the more reason to see the show, especially in this production!

Although his part is brief, one of the most memorable roles is that of the street sweeper and later waiter (portrayed beautifully by Ethan Ropp or Lee Schwetje) who sings diffidently and then confidently “Tomorrow Belongs to Me,” serving as an unofficial Nazi anthem in the world of the “Cabaret” musical.

The most surprising and delightful performance is perhaps the Emcee as played by Lenore Mionette Florez.  The part seldom goes to a woman, but she handles it brilliantly and brings new dimensions as the Emcee leers, narrates, and in Brechtian style appears symbolically in other plots to trigger stylized action (such as dropping a brick on stage to symbolize desctruction of  Herr Schultz’ shop in an event to prefigure the November 1938 Reichskristallnacht).

Under the direction of music director Alex Ruth, the live band is excellent at playing Kander and Ebb’s score as it plunges into imitating 1930’s Berlin cabaret music – jazz influenced, folk influenced, and somewhat dissonant.  The sound mix is good, and the direction of  William Lewis and the choreography of Kendall Sigman are nothing short of superb.

The ending of the play is utterly shocking, completely different from the 1972 film version, and – like the rest of the Fredericktowne Players production – utterly engrossing.  In lieu of a plot spoiler, I will end in the spirit of the production’s ending, again making use of a quote from Weimar Republic journalist Kurt Tucholsky just before Hitler’s ascension to power:   “The world for which we have worked and to which we belong no longer exists.  The world to which we belonged is dead.”

“Cabaret,” produced by The Fredericktowne Players, runs through September 30 at the Jack B. Kussmaul Theater on the Campus of Frederick Community College, 7932 Opposumtown Pike, Frederick MD. For tickets, call the box office at (240) 315-3855 or go online.