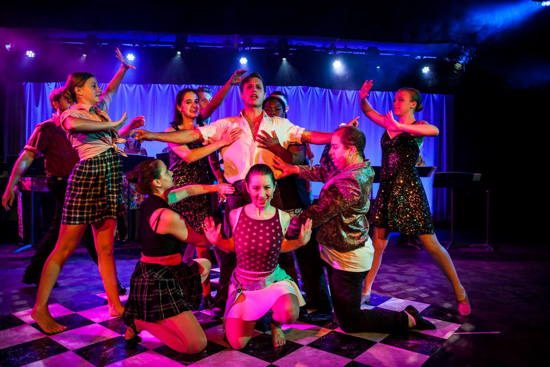 The cast of “Chess.” Photo by Austin Barnes Photography.

“Chess” is a musical notorious for its many varied adaptations and revivals, including a recent West End revival; the Tidewater Players’ production, directed by Mark Briner, was the Maryland premiere of this new and improved version. The show, which features a score composed by ABBA’s Benny Andersson and Björn Ulvaeus and lyrics by Tim Rice, centers around the 1984 World Chess Championship in Merano, Italy. The two competitors—the returning champion, an American named Freddie Trumper (Rob Tucker) and a Soviet Russian named Anatoly Sergievsky (Shawn Doyle)—go head to head not only in a game of chess, but also in games of the heart as they compete for the affections of Florence Vassy (Barbara Hartzell), Freddie’s second.

…the Tidewater Players’ production of ‘Chess’ is a refreshingly new variation on this modern classic.

This revised script contains many notable changes from some previous productions, including a completely alternate plot in the second act. To those who know the show well, the changes might be jarring, though all of the show’s most iconic tunes are still present. To newcomers, the story is still intriguing and coherent, although occasionally hard to follow; Andersson and Ulvaeus’s score often introduces narration and backstory through the rapid patter songs sung by the ensemble, which can be difficult to understand. The minimalist staging, though attractive to the eye, may also have impaired my ability to follow the plot, as I lacked the visual cues audience members often rely upon to help them know what is going on.

Despite the disadvantages of this minimalist approach, however, what technical elements the Tidewater Players’ did employ were very artfully incorporated into the show. Dynamic lighting design by Thomas Gardner kept the eye engaged and helped assist shifts in mood and plot. Choreography by Bambi Johnson was also wonderful; the tournament sequences in which ballet dancers, clad in black and white, depicted what was happening on the chess board were some of the show’s most entertaining moments. “One Night in Bangkok,” one of the show’s most well-known numbers, was a joy to watch as well, full of fun, fast-paced choreography performed by nearly the entire cast.

Notable talents from the cast included Hartzell, a powerful vocalist who performed Florence’s iconic songs, such as “Nobody’s Side,” with her own unique flair. Doyle gave a wonderful performance as Anatoly; his warm voice was perfect for “Anthem,” one of the most emotional numbers in the show and the first act finale.

Eileen Aubele gave a stellar performance as Svetlana Sergievskaya, Anatoly’s wife. Though her character is only introduced partway through the second act, Aubele still managed to use her every moment on stage to the fullest. Her performance was powerful and affecting, and her beautiful, strong belt was perfectly suited to her (unfortunately only) solo, “Someone Else’s Story (Reprise).”

However, perhaps the most stunning star of the show was Tucker as Freddie. Tucker’s explosive portrayal easily rivaled Adam Pascale’s, Raul Esparza’s and Murray Head’s, with stunning vocals that reached the apex of the character’s range with ease. From his first appearance in “Merano” through to his emotional solo “Pity the Child,” Tucker stole the scene every time he stepped on stage.

Overall, the Tidewater Players’ production of “Chess” is a refreshingly new variation on this modern classic. Stripping the show down to its base components for this unique concert production may not have been the most effective way to convey the plot, but it certainly puts a well-deserved emphasis on the music, which is certainly the show’s most iconic element. If you’re interested in the Cold War, the politics or history of chess, or you just love bobbing your head to ‘80s pop music, you’re sure to enjoy “Chess.”

Tidewater Player’s concert production of “Chess” plays September 14th and 15th at 8pm, and September 16th at 2pm at the Cultural Center at the Opera House, located at 121 N. Union Avenue, Havre de Grace MD 21078. For tickets and information, click here or call the box office at 667-225-8433.