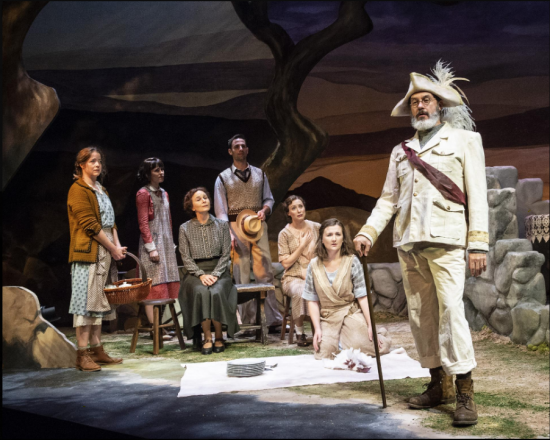 In Ballybeg, a fictitious town in Ireland, in late summer of 1936, a memory flowing with the interconnected stories of five sisters unfolds that concedes a bittersweet picture of inevitable change. “Dancing at Lughnasa” (Directed and Choreographed by Amber Paige McGinnis) is told through the lens of an astute seven-year-old, Michael (Tim Getman), who manages to reveal a modest cache of affectionate details about each of his family members in their final summer together.

This production of Brian Friel’s semi-confessional vignette is, essentially, a poetic reminiscence more than a morose recollection of a time with kin that came and went like a picturesque Irish sunset. The performance centers around conversations taking place in the kitchen of a small cottage and is decked with copious elements to stimulate an assortment of interests. From the undercurrents of unwise romances to the curiosities of pagan ceremonies, and encroaching industrialization effecting the way of life for the townspeople of Northwest Ireland, this tale unpacks an unhappiness hidden beneath their contrived smiles and folly. Michael’s narration pieces together this autobiographical recount with realizations and footnotes of their economic struggles and their futile attempts to remain united as a family – all the while periodically interjecting the solemn fate of all of them.

A beautifully written story coupled with a fantastic cast and a touch of history warrants a recommendation to all who adore fine stage plays.

Perhaps the most colorful of this gifted cast of characters was Maggie (Megan Anderson); a joke-telling smoker whose interactions with the invisible, young Michael provided some corny, but light-hearted humor that made me chuckle multiple times. In one scene, Maggie peeled away her layer of jest and revealed buried dismay at the mention of an old school friend in a frozen stare and retelling of a botched teenage dance competition.

The prudish, schoolteacher sister, Kate (Bari Hochwald) was truly a central character and reminded me of the old, church lady that always has great intentions, but often goes terribly awry. Chris (Katie Kleiger) is the unwed mother of Michael who falls for the empty promises of Michael’s Welsh father, Gerry (Danny Gavigan), who often airs a complicit eagerness to believe his untruthful words. Although she is the red rose of the garden, she never really shows her thorny side –even when Gerry dances rather brazenly with Chris’s knitting extraordinaire sister Agnes (Annie Grier). It was an eyebrow raising scene, to be sure.

The immature and love torn Rose (Labhaoise Magee) frustrates the sisters with her forlorn hopes. However, Rose does seem to have the most unrestricted spirit of the group. The dance scene that ensued a conversation about the harvest festival (Lughnasa) was definitely a highlight as all the women unleashed their fettered energy and shrieked emphatic commentary they otherwise would never say. The kooky “Father Jack” (Bruce Randolph Nelson) brings an element of the strange and exotic in his reenactments of ceremonies he witnessed in Uganda –much to the discomfort of Kate, who holds on dearly to her Rosary.

Watching this play, I couldn’t help but be captivated by the assertive interactions between these very skilled actors. Their dialogue was fluid and their antiquated Irish dialect didn’t veer off into obscurity too often. I did find there were more lows than there were highs, which might actually be an underlying motif as the story was a reverence of a moment in time, yet melancholy in its multifaceted connotations.

Director Amber Paige McGinnis did a masterful job of orchestrating Friel’s play and bringing it to life. The ambiance of the Everyman Theatre is truly quite beautiful, which made the stage all the more impressive. Set designer Yu-Hsuan Chen deserves much credit for creating a meager, but detailed cottage and kitchen. Costume designer David Burdick deserves a nod for the impressive dress of the cast, which had an authentic feel for the time period.

Overall, this presentation and performance was first class. A beautifully written story coupled with a fantastic cast and a touch of history warrants a recommendation to all who adore fine stage plays.

“Dancing at Lughnasa” is playing now at Everyman Theatre in Baltimore until October 7. For more information and purchase tickets, click here.