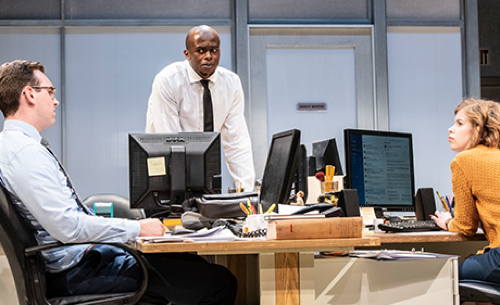 “Gloria” is a really, really good comedy. And it is a really, really good drama. The reason it’s so good? It doesn’t go for the easy laugh or the obvious guffaw; although some of the situations the “workers” found themselves in at the office ring just so horrifyingly true—we’ve had those conversations, listened to those co-workers, worked for those people. And we’ve put people in the boxes and then never looked further. That can lead to the lightning-quick change from just another day at the office to a life-altering event. But ‘Gloria’ holds up a mirror, whether you want it to or not.

. . . this is comedy with wit, bite and fear, and may be much more suited to our times.

“Gloria” is set in an office (Act 1) and a coffee shop and then another office (Act 2). The story revolves around how we rationalize and justify our ambition; it also asks can ambition be an addiction? After a horrifying event by Gloria (seen fleetingly on stage; outsize in her effect) people have a choice, and most flirt with making a choice that extends their 15 minutes of fame.

Because the sad truth is that they can only process Gloria’s life and actions through their own ambition, even when they seem totally unconscious of it. “Haven’t got a clue” almost adequately sums up these characters. But you can’t just dismiss them, either. Except for Lorin (an amazing Ahmad Kamal who emerges as the truth-seeker in the piece) they seem afraid of looking too deeply into their lives; they may be walking clichés in many ways, but you can sense the potential and feel sorrow at the waste.

“Gloria” is directed by Kip Fagan. The screwball-comedy pacing of the first act is pure genius, as the laughs come frequently, and yet underneath, there is a slight current of trepidation. It’s a delicate balancing act and Fagan achieves near perfection with it. This isn’t a 1930s comedy with Hepburn and Tracy racing to what you know will be a happy ending; this is comedy with wit, bite and fear, and may be much more suited to our times.

This is also a show I wish I could see through two eyes at once — the eyes I have (of an older worker) and the eyes of a twenty-something (the age of our intrepid office drones on stage). There is a desperation in all their talk of incentivizing and maximizing their social media, their blogs, their networks that is as old as the advent of the office as the primary workplace. Watching them try to figure out how to be seen and heard and matter felt weary to the older me; I wonder what it would have felt like seeing it through the eyes of a younger me.

The cast is nearly pitch-perfect. Megan Graves as (Ani/Sasha/Callie) is adorkable as the assistant who’s always cheery and tries to be positive; Eunice Hong (Kendra/Jenna) is hysterically foul-mouthed and full of frenetic energy that is a brilliant cover for a flailing 20-something convinced she has a Plan A, a Plan B and more to launch her success. Alyssa Wilmoth Keegan is Gloria and Nan, and as Nan she is unrecognizable as Gloria in the first act—it isn’t just hair and clothes, posture, gestures, voice—it’s a master class. Ahmad Kamal plays Lorin throughout both acts. As Lorin, the arc of his character experiences the deepest change, and you can see what it has cost him in a world that worships fast and upward at all costs.

Justin Weaks portrays Miles/Shawn/Rashaad (and he has some real fun with that last character). Conrad Schott plays somewhat schlubby, fading (and not yet 30) Dean and also Devin. Both actors capture the essence of each of their characters.

The set design by Misha Kachman is glorious. It captures the bland, soul-sucking modern office environment so well that it is rather depressing. The coffee shop set that starts off the second act is a marvel in bland, faux-hip coffee shopness everywhere. This is a set that underscores the angst and futility and sheer pettiness of much of life.

For all the glibness and fast and furious pace of the first act, this is a show that creeps up on you. The characters are well drawn enough that you recognize facets of them and so you do care, a little, about them. The scary part is wondering just how much of those less desirable characteristics we might have, and how would we look to an audience. Just how moral are you?

Running Time: About 2 hours including a 15-minute intermission.