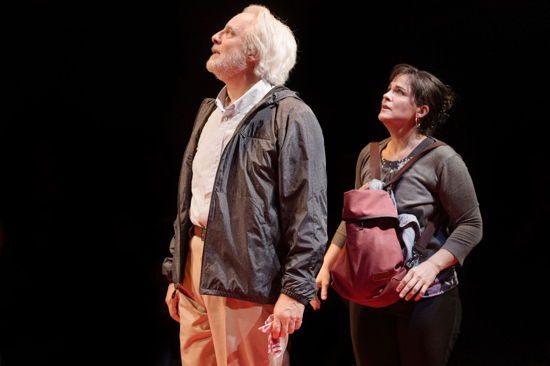 Michael Russotto (Alex) and Rachel Zampelli (Georgie) in the DC premiere of Heisenberg at Signature Theatre. Photo by Cameron Whitman.

“Heisenberg,” the play written by Simon Stephens, might be named for German physicist Werner Heisenberg and his uncertainty principle, but there is one certainty in the show running in Signature’s smaller black box theatre, the ARK—this is a love story of two souls colliding. The collision is funny and gentle and heartfelt, and felt like a balm in a time of great upheaval and uncertainty.

“…funny and gentle and heartfelt, and … a balm in a time of great upheaval and uncertainty.”

As the story opens, Georgie Burns (a luminescent Rachel Zampelli suddenly plants a kiss on the back of a stranger’s neck [Michael Russotto as Alex Priest]) at a train station in London, where they both live. He leaps up and she backs away apologizing, and then not apologizing, and then apologizing again, and then just unspooling a stream of consciousness that nevertheless circles back to why she kissed him. Turns out that Georgie is not really who she first says she is, and she may have been attempting to con Alex. But Alex, as small as his life might seem to an outsider, is not a fool, and he ultimately takes a chance on the vulnerable woman he senses within her. Oh, and he’s 75 and she’s late thirties. She also has a secret.

The catch in Georgie’s plan is that she falls for Alex; she turns out to be a terrible conwoman. When she confesses all and he leaves, one can feel the anguish in both. But when he returns and meets her near her work (and not it’s not as an assassin as she first claimed), he does something unexpected, and his understanding and generosity, his sheer willingness to take a huge leap of faith, is inspiring. In his acceptance and love of who she really is, she lets go of some hurt. In his winter and her late summer, they find what they need and claim it.

As Georgie, Zampelli has the bulk of the verbal work to do. She can’t stop spinning tales or even talking, and her verbal leaps are mind-bending to Alex, even as he takes his time in responding. But he’s steadfast and calming, and you can almost see her shoulders relax when they’re together. The chemistry between them is palpable, even if it takes them a while to realize it. It could be, as Alex puts it at one point, that he needed all those years to prepare for her.

Russotto does an impeccable job as the gob-smacked Alex. His character is intelligent, clear-eyed, a bit stolid. He lives a well-ordered life, which Georgie just bulldozes into and turns upside down. Even while clearly smitten with her, there is a part of him which wants to know why a beautiful, young woman is willing to go to bed with him. He may not have traveled much, but he is observant and actually quite kind. Plus, his reactions to Georgie’s thought bombs given voice are very, very funny.

And the bedroom scene is lusty and loving and just plain fun. You have two brave actors skivving down to their underwear and romping on and around the bed. They have real bodies, which is refreshing. You forget about their bodies because their minds are so connected.

The writing in this play is downright funny. There are many laugh-out-loud moments (which are especially cathartic now), and there is charm to even up the cleverness. A May-December romance could seem old hat, but these two characters take the writing and breathe refreshing life into it.

The set (designed by Pamela Weiner), simplicity itself, works insanely well in the context of this show. It’s basically two large boxes with hinged ends that serve as the aforementioned bed and as the benches in the train station and his butcher shop. Often working in tandem, Zampelli and Russotto reconfigure the pieces as needed. And depending on how fast or hard they reconfigure, the emotional tone of the play stays intact. It’s a brilliant piece of workmanship.

Joe Calarco directs with a light touch. The pacing is tight and the bon mots and outrageous statements and mini-monologues are delivered strongly by both. The spare set underscores the void in each character’s life, and the lighting design by Andrew Cissna grows steadily warmer at the end along with their relationship.

This is a show that believes life is an adventure, and it doesn’t always need planning and money and events; it takes openness and kindness and readiness to take a chance to embark on a really great, somewhat wacky journey. And for 80-85 minutes we the audience get to share in this discovery.

Advisory: Strong language; some romping on a bed in undies.

Running Time: About 85 minutes with no intermission.