Theatre Review: ‘How to Win a Race War’ by The Klunch 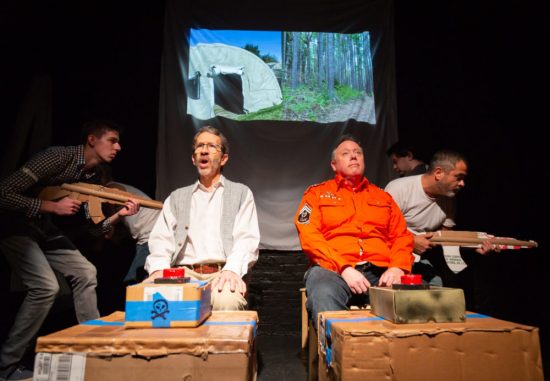 Ned Read, Tony Greenberg, Will Low and Matty Griffiths in ‘How to Win a Race War.’ Credit The Klunch.

“How to Win a Race War,” presented by The Klunch, starts off with a noble goal—to take white supremacist writings and fan fiction and to make a joke out of it, thereby robbing the white supremacy movement of its power. It was not entirely successful.

The show is divided into three acts. The first is set in the pre-Civil War South (Part 1: Get the Guns!); the second in the 1990s (Kill All Infidels!); and the third in the future (Rinse and Repeat!), as imagined by Ward Kendall and maybe L. Ron Hubbard. Each act was about 55 minutes. The three pieces were based on a number of “nonfiction” (read, revisionist history) and fiction books (which were available in the intermissions on the stage for people to look at) which describe the alt-right worldview in gory, graphic detail.

“‘How to Win a Race War,’ presented by The Klunch, starts off with a noble goal…robbing the white supremacy movement of it’s power.”

While the intent may have been to skewer the stereotypes inherent in these insane beliefs, the in-your-face message could have been delivered a bit more subtly. But considering how frightening our world is at this moment, the author’s anger was palpable and justified.

A few times in the show there were moments that showed what a tighter work could accomplish, but these moments were overshadowed by the over-the-top caricatures of the misanthropic, homophobic, racist, anti-Semitic and misogynistic tropes in the white supremacist library.

The cast, all male, did an admirable and enthusiastic job. In the show’s musical numbers, the men’s voices blended seamlessly. It was amusing to see the alt-right co-opt the Beatles’ “Revolution” as they sang wistfully of their hopes for their vision of the future. Among the cast,  Connor Padilla and Grant Collins, in particular, brought heartbreaking fear and resignation to their roles, most notably as a female house slave, an innocent Southern belle, a Jewish woman held as a sex slave, a white supremacist fighter, and a young white man living in a world where whites are second-class citizens.

Given the prolific use of the N-word and other epitaphs, it was probably a wise chose to use an all-male, mostly white cast to most effectively lampoon the fear-stoking ridiculousness of the white supremacist world-view. There were no punches pulled in the dystopian past, present and future the alt-right sees, and these actors played their roles to the hilt.

The set was spartan—a good number of the pieces were fashioned out of cardboard; the show is meant to be the staging of a group of supremacists putting on a show, so the shoe-string look of the props was apt. To keep in mind that this is a play-within-a-play, a couple of times in each of the three interlocking stories, one character would ask, “Was that my line?” It helped to ground the audience and remind them of the sardonic superstructure of the work itself.

‘How to Win a Race War was written and directed by Ian Allen (who wrote the wonderful ‘Laura Bush Killed A Guy’). Mr. Allen included in the program a New York Times opinion piece he wrote and that was published on July 30 of this year. This piece is well-written and lays out his architecture for the show.