Theatre Review: ‘If I Forget’ at Studio Theatre 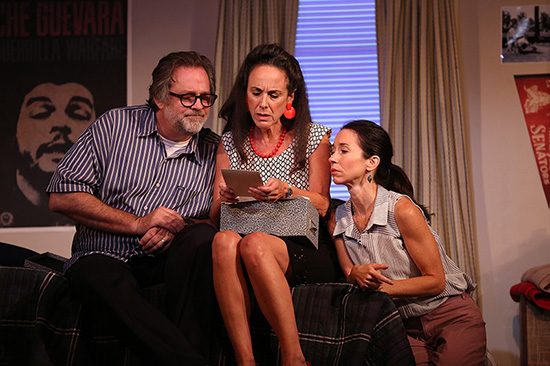 Jonathan Goldstein, Susan Rome, and Robin Abramson in If I Forget. Photo by Carol Rosegg.

There are no easy answers to be found in Steven Levenson’s “If I Forget,” a finely drawn examination of heritage and memory in performance at Studio Theatre. Through the lens of a domestic drama, the show explores the state of American Jewish identity at the turn of the 21st century, anchored by an impressive cast.

Set in Tenleytown in 2000, the story centers on the Fischers, an American Jewish family gathering for the birthday of the family patriarch, Lou (Richard Fancy). The play introduces us to Lou’s adult children piecemeal, starting with Michael (Jonathan Goldstein), the middle child, married to Ellen (Julie-Ann Elliott), who is not Jewish. They are parents to Abby, a college student visiting Israel for the first time, a development that thrills Ellen and worries Michael.  As Ellen speaks calmly to their excited daughter on the phone, a restless Michael paces the floor. He balks both at the idea of Abby taking a moonlight tour of Israel, and that Israel is their heritage. “Heritage is a problematic concept,” he opines, a statement that foreshadows the conflicts to come.

Michael’s discomfort with heritage is not shared by either of his sisters. The eldest, Holly, is played with imperious perfection by Susan Rome. In chic attire, and with an enjoyably acidic temperament, she attacks Michael’s work as an academic for being unreadable and challenges him on his lack of support for Israel. “I forgot he loves the Arabs,” she quips as they spar over the kitchen table about Israel, religion and voting for Nader.

…a finely drawn examination of heritage and memory.

Michael finds another sparring partner in his younger sister, Sharon (Robin Abramson), an irrepressible kindergarten teacher and temple-goer. Sharon sees herself as protecting the family’s heritage, not just through her support of Israel, but also by protecting the legacy of the family’s 14th-street store, operated by the Jiménezes, an immigrant family that she has in turn befriended.

Steven Levenson’s script is joke-dense and engaging; his ability to capture the rise and fall of family dialogue is impressive, and the sustained conversations are given plenty of room to breathe under Matt Torney’s direction.

Jonathan Goldstein’s assured and human performance as Michael is the emotional center of the show. Goldstein deftly navigates Michael’s complexity as a distraught father, unreliable brother, and academic pontificator. His foil is Lou, played with dignified grace by Richard Fancy. Lou’s recounting of his part in the liberation of Dachau as an American soldier is a moving interlude of the second half. “For you, history is an abstraction,” he says, “But for us, the ones who survived this century, this long, long century, there are no abstractions anymore.”

Robin Abramson also deserves praise for her performance as the long, but not quietly, suffering Sharon who harbors a grievance against her siblings for their lack of support during their mother’s illness. The most religious of the three, she rails against Michael’s unpublished book, a work called “Forgetting the Holocaust” which she considers incendiary. “Obviously, you hate where you come from,” she insists.

The geopolitical tensions witnessed on screen rise and ebb, as do the fates of the Fischers in the second half. Lou’s illness brings the siblings back together under strained circumstances both personal and financial. Sharon’s opposition to Holly’s plan to transform the family store into an interior design business, a move which would require the eviction of the Jiménezes, surface the family’s uncomfortable relationship to colonialism and gentrification.

In recognition of the deeply difficult questions that the play evokes, Levenson’s ending appropriately feels more like a coda than a bookend. The satisfyingly poetic finish reminds us that no matter our personal or cultural inheritance, it’s time that wins in the end.

Running Time: About three hours with a 15-minute intermission.

“If I Forget” runs through Oct. 21st at Studio Theatre. For tickets or more information, click here.