Theatre Review: ‘Putin on Ice (that isn’t the real title of this show)’ at Single Carrot Theatre 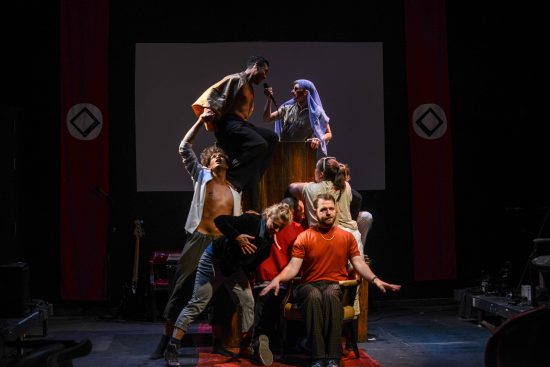 In 2017, a writer on “Odyssey” named Julia Cooper wrote a short article titled “Satire Isn’t An Excuse for Bad Writing.” It may have been obscure and likely touched a few raw nerves, but her point was simple: “[Satire] takes for granted that the audience is intelligent enough to be in on the joke and therefore it finds no need to shout its ideology down their throat.” Case in point: When I first walked into Single Carrot Theatre for the showing of “Putin on Ice (that isn’t the real title of this show),” created in collaboration by The Acme Corporation and Single Carrot Theatre, I was immediately struck by the strange people covering their heads with silky, black fabric. I didn’t understand the point of it then and I still wasn’t sure what it meant as I left the show later in the evening. This set the tone for how this politically ambiguous performance would unfold.

The actors were exceptional.

I give credit where credit is due. The stage for this performance was perfect at floor level and had an ambiance that reminded me of the marching hammers scene from Pink Floyd’s “The Wall” movie. It was dark and somber with an illuminated bust of Vladimir Putin sitting on the upright piano against the black wall. The actors were exceptional. I give high marks to Hockey Putin (Paul Diem), who also played bass guitar for their musical numbers, Religious Putin (Mohammad Suaidi), who played Romeo splendidly, and his slow-motion running action made me chuckle uncontrollably, and Judo Putin (Alix Fenhagen), who showed off some fantastic acting versatility. I found this curious performance had its moments of blunt humor, so the occasional outbursts of spotty chuckles were well earned.

What I took away from this segmented compilation of historical drama, musical numbers, game shows and even some Shakespeare, was the zany notion Putin was the mastermind behind everything throughout history –even in the great works of art. However, what “Putin on Ice” painfully lacks is clarity in its reasons –reasons for Putin’s influence (even a comical one) and reasons for the conjecture. It explores all the absurdities of Putin’s influence but never gives any indication as to why it is so. Not even an additional juvenile joke is ever offered about what Putin is (or isn’t) that would afford him such influence. Perhaps this was expected of me to know (to be in on the joke), and I wondered if I was the only one in the theatre that failed to see the point of it all – other than Putin is everywhere.

There are a lot of elements to unpack in this unusual play. First, the ensemble consisted of different versions of Putin with the exception of Tania Karpekina, who played herself. However, she mostly spoke in Russian so I couldn’t make heads or tails about her dialogue. The costumes were modest, though I believe “Religious Putin” was the most flamboyant. Costume designer Molly Cohen, who also plays “Baby Putin,” made all the Putins look very western-influenced. Director Yury Urnov deserves some credit for the fluidity of the performance, as does movement director Jarod Hanson. There’s certainly a lot of motion in this play. Music director Stephen Nunns and sound designer Steven Kreigel also deserve some notice since their selection of music, sounds and their placements throughout the play were impressive.

One caveat for those who might think this show literally puts Putin on the hot seat; it doesn’t. I found it is neither good nor bad to Vladimir, but perhaps flatters in such a way an angry mother-in-law may flatter her son-in-law for being lazy. Sounds confusing? Perhaps it is. As was the constant reminders from everyone involved in the performance that “You are free to leave at any time.” It was the first thing I heard entering the theatre and heard it countless times throughout. Why? I’m a pretty intelligent person, but I still don’t get it.

“Putin on Ice (that isn’t the real title of this show)” is showing at Single Carrot Theatre in Baltimore now through October 7, 2018. For more information, please click here.