Theatre Review: ‘Rumors’ at The Colonial Players of Annapolis 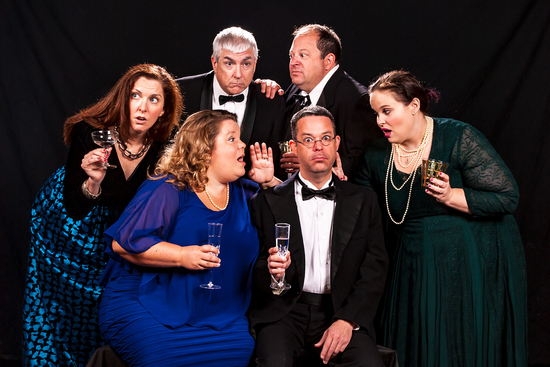 Drawing laugh after laugh from an engaged audience, The Colonial Players open their 2018-19 season by celebrating the legacy of the great Neil Simon with an uproarious production of “Rumors.”

“Rumors” is Simon’s first farce: a milestone for the master of Broadway comedy. First performed on Broadway in 1988, the play maintains the farcical tradition of Moliere, featuring elegantly dressed people who find themselves in increasingly outrageous situations. Chaos and misunderstandings characterize “Rumors,” which opens as larger-than-life guests arrive at a tenth-anniversary party. With the host bleeding upstairs, his wife and their servants mysteriously absent, and more guests arriving by the minute, things quickly take a turn towards the absurd!

Performed intimately in the round, the best thing about ‘Rumors’ is the palpable, infectious energy of its ensemble cast.

Performed intimately in the round, the best thing about “Rumors” is the palpable, infectious energy of its ensemble cast. Director Atticus Cooper Boidy creates active stage pictures that play off Simon’s fast-paced, clever dialogue. This constant movement works well with the chaotic nature of the action and is executed perfectly by the talented cast, ensuring that the two-hour run time never seems too long.

Shannon Benil and Dann Alagna open the show as Chris and Ken Gorman, a panicked pair of lawyers who bicker over every little detail. Both Benil and Alagna are utter fun to watch, working well together to establish the madcap humor of the play with a hilarious phone call to their confused doctor.

The next guests to enter the party, Mary C. Rogers as Claire Ganz and Brian Binney as Lenny Ganz, perfectly embody their tennis-club-attending, BMW-driving couple, especially when the persnickety Lenny gives his wildly physical and sensationally funny speech late in the second act. Watching Binney gallop around the stage, pantomime increasingly improbable events, and stun the cops (played by John Purnell and Stephanie Bernholz), all while wearing pajamas with bandages around his head, is a true highlight.

Rounding out the strong ensemble are Glenn Singer and Amy E. Haynes, as the well-meaning Ernie and ditzy Cookie, and Kevin McConnell and Rosalie Daelemans as Glenn and Cassie Cooper, trapped in their eccentric yet toxic marriage.

In a small space, technical design focused on details and creativity. Constance Robinson’s properties accent the living room set, complete with dinner for the actors and a much-utilized drinks cart. At each corner of the theatre, distinct doors create portals to other parts of the house, ensuring that the audience always knows where each actor is coming from.

A wild romp through absurd comedy, “Rumors” is a pinnacle of community theatre, a genuinely fun night of mishaps and mayhem for all to enjoy.

Kristen Waagner is a theatre student at Northwestern University and a graduate of McLean High School. She began reviewing theatre as a high school sophomore with the Cappies of the National Capital Area.