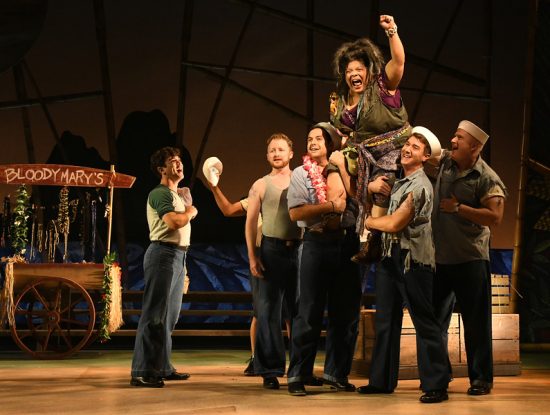 Cheryl J. Campo and the cast of South Pacific. Photo by Stan Barouh.

Olney Theatre Center is currently producing Rodgers and Hammerstein’s timeless musical “South Pacific,” featuring a first-rate cast that will keep you engaged and enchanted until the final bow.

“South Pacific” takes place in the Pacific Theater during World War II with two interrelated parallel plots. In one, an American nurse and ingenue stationed on an American-held island, Ensign Nellie Forbusch, falls in love with a French plantation owner, but she is offended by his earlier marriage to a woman of Polynesian descent. Similarly, Lt. Joseph Cable of the U.S. Marine Corps falls in love with a Pacific Island girl.

…will keep you engaged and enchanted until the final bow.

First produced on Broadway in 1949, the play was, for its time, a controversial indictment of racial intolerance. Yet surely this social statement from the segregation era makes the play an outdated period piece? Not at all, maintains artistic director Jason Loewith, not after last year’s extreme rightist Charlottesville rally, marked by racial hatred, street violence, and death. With such recent events in mind, the venerable Olney Theatre Center has launched its first-ever production of this Rodgers and Hammerstein musical, directed thoughtfully by Alan Muraoka, choreographed with showmanship and panache by Darren Lee, and musically directed with love by Kristen Lee Rosenfeld.

Helen Hayes Award nominee Jessica Lauren Ball brings to the part of Ensign Nellie Forbusch cockeyed optimism, as called for in the song “A Cockeyed Optimist,” as well as charm and a convincing southern accent which is used both in speaking and singing. William Michals, who has performed the role of Emile de Becque at Lincoln Center Theater, brings gravitas to the acting and an operatic voice to the singing, most notably with the power and warmth of his renditions of “Some Enchanted Evening” and “This Nearly Was Mine.”

Cheryl J. Campo as Bloody Mary is particularly memorable, both in her singing of the haunting “Bali Hai” about the island of that name as well as in her comic verve witnessed throughout the play. Using his splendid tenor voice, Alex Prakken as Lt. Cable delivers quite formidable renditions of “Younger Than Springtime”and “You’ve Got To Be Carefully Taught.” Alexandra Palting as Cable’s romantic interest, Liat, delivers in beauty and grace.

Supporting roles include David Schlumpf as Luther Billis, Stephen F. Schmidt as Navy Captain George Brackett, and Michael Bunce as Commander William Harbison. Daniela L. Martinez/Eliza Prymak and Nathan Pham/Hudson Prymak alternate as Emile’s children.  The rest of the ensemble add their strong voices and dance skills to such iconic numbers as “There Is Nothing Like a Dame” and “I’m Gonna Wash That Man Right Outa My Hair.”

“South Pacific,” it should also be remembered, has a show-within-a-show, “Thanksgiving Follies.” Here one sees on excellent display both Broadway dancing and some of the jazz stylistics of the score. Christopher Youstra’s nine-piece orchestra shines at such moments. Audience members willing to stay after the bows of the actors receive an additional musical treat: the orchestra rides into a swing instrumental version of “Happy Talk,” one of the stalwart songs of Bloody Mary in the musical proper.

With its timeless story and music, along with its first-rate cast and high quality production values, “South Pacific” at Olney Theatre Center will keep you engaged and enchanted until the final bow.

Running Time: 2 hours and 50 minutes, including one intermission.