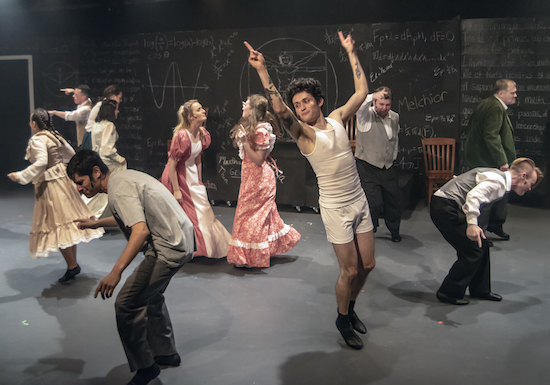 The cast of “Spring Awakening” dances their angst away. Photo by Rachel Zirkin Duda, Duda Photography.

Before the “Hamilton” craze of the historical musical with unapologetically anachronistic elements, “Spring Awakening” triumphed as an innovative rock musical in 2005 with its Broadway debut and then again with its American Sign Language-embedded revival in 2015. A beautiful musical with heavy thematic elements, Wolf Pack Theatre successfully guides the audience through an emotional storytelling experience in a unique and intimate space in their rendition of “Spring Awakening.”

Before the debut of the stage musical, Frank Wedekind, a German playwright, penned “Frühling Erwachen” in 1891. Over 100 years later, Steven Sater would reconstruct the narrative with a punk rock infusion to create his book and lyrics.  Duncan Sheik composed the angsty and catchy score. Without giving too much away for first-time viewers, the plot heavily revolves around German teenage girls and boys navigating their way through a compartmentalized schooling system with rule-enamored adults hiding truths in plain sight. To be blunt, no one wants to explain the function of human anatomy to pubescent teenagers. While the thought of this scenario may elicit a chuckle, Sater and Sheik take us on a dark journey – sexuality without comprehension of consequences. Melchior (Christian Gonzales), a charming buck of a boy, discovers himself fawning over the idyllic Wendla (Rachel Sharp), and a romance quickly buds. Meanwhile, the adult figures (Christine Jacobs and Tom Tomlinson) seem to be actively working to make teenage lives miserable, specifically singling out the easily spooked Moritz due to his lack of academic prowess. Things get real when the German youth start tripping into topics such as self-exploration, physical abuse, depression, and pregnancy. To be clear, this is a musical with mature themes and a brief flash of nudity. However, the content is a great conversation starter for both young and old, and the script is well-handled by the cast and crew of Wolf Pack.

“Spring Awakening” is required reading…or in this case, required viewing.

The ensemble’s vocals would have left Sheik with a satisfied smile. The actors of Wolf Pack should take great pride in their work in regards to the emotive quality of their singing. Their voices filled the theatre space with powerful harmonies and dissonances, which were complemented with a well-rehearsed orchestra. At times, there were some balance issues with soloists, microphones, and orchestra, but the soloist breezed through any obstacles posed from the technical side.

Gonzales and Sharp’s rendition of the Melchior and Wendla romance would make any teenage heart swoon, especially during their sensual duet of “The Word of Your Body.” With a light glide of the pinky finger over the other’s wanting hand, both Gonzales and Sharp established a warm relationship that tugged at the heartstrings and reminded anyone of a first love. Angel Duque was well-cast in the role of Moritz. Duque engaged in every scene as though his life depended on it, which was a subtle and clever use of foreshadowing for later in the show. Christine Jacobs (Adult Female) and Tom Tomlinson (Adult Male) had their work cut out for them, each of them playing multiple roles with distinguishable characters.

In particular, Jacobs’ exploration of femininity and motherhood was intriguing and very well done. “Spring Awakening” saves some of its best supporting role moments for Act 2, specifically highlighting Ilse (Alex Reeves), Hänschen (Kenneth Lautz), and Ernst (Sean Miller). Reeves opens and closes a powerful second act with absolute strength and control; she completely uses her skills and abilities as an actor to make everything about the production so much better. Lautz and Miller’s much needed moment of levity and light-heartedness rekindled any hope that may have been lost. Hänschen’s delicious delivery of his seduction of Ernst was like that of a pussycat playing with his prey. And of course, I can’t even write out the name of the showstopper… “Totally”, well the F, dash, dash, dash word. The ensemble nailed the energy in “Totally F***ed,” and a fun reprise is saved for after bows.

The co-directors Christopher Overly and William Leary led the cast and crew through a thoughtful, artistic vision with a chalkboard-stylized set design, effective minimalism, and carefully constructed blocking. A personal favorite touch was the various algebraic equations and classical languages written on the walls with a sketch of Da Vinci’s Vitruvian Man as the center focus. The primarily black and white color design in an intimate thrust stage gave the lighting designer, Stephen Beitzell, ample opportunity for creativity. With some unusual choices in color palettes and specials, Beitzell took a commendable risk. Choreographer Kay Chmura understood all aspects of the music and physicalization of “Spring Awakening.” The choreography successfully told its own story; each movement had meaning.

“Spring Awakening” is required reading…or in this case, required viewing. Wolf Pack’s imaginative recreation of Wedekind’s vitriolic play is a story that opens a conversation. It was apparent that every actor cared about the content deeply. This is a show that should not be avoided because of the content. It should be wholly embraced in the heart of the Greenbelt Art Center.

Running Time: About 2 hours with one 20-minute intermission.