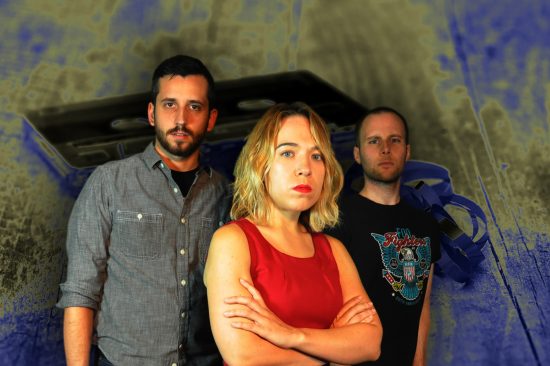 Joe Waeyaert as Jon, Brianna Goode as Amy and Mike Rudden as Vince in “Tape” at Dominion Stage.

This show couldn’t be more timely; surely an act of providence. And as I have come to see as a hallmark of Dominion Stage’s moxie, it is fearless in tackling head-on a subject in today’s headlines: teenage sexual assault, consent and accountability.

…a thoughtful exploration of culpability and responsibility and consent and gives a very authentic voice to a woman’s anger.

The show revolves around three old friends who have drifted away from each in the 10 years since graduation. Vince (Mike Rudden) is a 28-year-old drug dealer and volunteer fireman living in California. Jon (Joe Waeyaert) is also 28 and a would-be auteur who has a film accepted in the Lansing, Michigan film festival. Amy (Brianna Goode, and the producer of this show) is an assistant district attorney for the city of Lansing. In high school, she dated Vince, but just before graduation, they broke up. They all ended up at the same party one night near the end of school, where she expressed interest in Jon, who was Vince’s best friend. While it seems that Amy and Jon are moving ahead in their lives, and Vince is sort of stuck, things aren’t always as they seem.

The first act is all Vince and Jon and their rather awkward reunion in Vince’s room at the Motel 6. (I would love to know where the set designer/set dresser, David M. Moretti, found such perfect bedspreads for a seedy motel room.) While Vince greets his friend with puppyish enthusiasm, Jon is much more reserved and somewhat aghast at being in a Motel 6. Vince has come to support Jon’s entry in the film festival, and to resolve an issue with Jon and Amy.

Seems that Jon might have coerced Amy into having sex with him the night of the party. Playing the fool a bit, Vince wears Jon down into confessing that yes, he held her down, pinned her arms, and penetrated her, without her consent. And Vince tapes Jon’s confession, without Jon knowing. Then he springs the news on Jon that Amy is on her way over; they were going out to dinner and she was picking him up.

During these scenes, the audience’s feelings of empathy shift back and forth between the two young men. While at first, it seems that Vince is sticking up for Amy in some befuddled way, it becomes clear that he has his own agenda. At first, Jon seems the more sympathetic character—trying to reconnect with his oldest friend, when they have little in common, even inviting him to stay at his comped room at the Radisson, overlooking the park. Even when Jon finally admits that it could be called rape, there is a sense of remove in his confession; you can almost see him distancing himself by looking at it as a “scene.” His most honest reaction is the fear and rage when Vince holds up the little tape.

Goode accesses a torrent of gut-wrenching rage that felt so true that it was almost too much to bear. There was a level of cruelty in Vince’s decision to take the choice to face Jon from her. And there was a depth of meanness and self-centeredness in Jon that made his character loathsome. Two of these characters were clueless in some very essential ways, and it wasn’t Amy.

Rudden played Vince like a violin; he was so spot on he hummed. As Jon, Waeyaert was reserved at times and he did embody a sort of wanna-be hipster.

Directed by Matt J. Bannister, ‘Tape’ moved expeditiously and smoothly. It was engrossing from the start and emotionally wrenching. The play, by Stephen Belber, is a thoughtful exploration of culpability and responsibility and consent and gives a very authentic voice to a woman’s anger.

Running Time: About 2 hours with a 15-minute intermission.