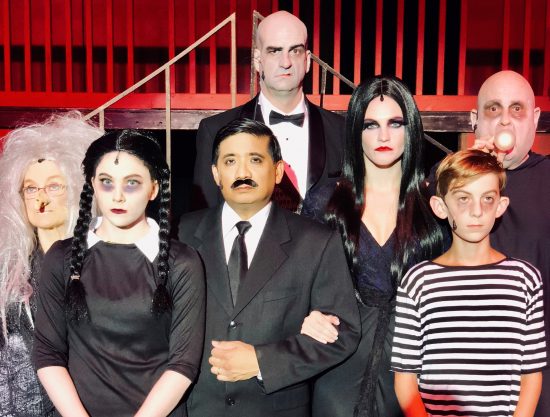 Just in time for the Halloween season is a comic-strip based musical called “The Addams Family” being presented by the Tantallon Community Players in Fort Washington, MD.

“The Addams Family,” based upon the 1930’s comic-strip by Charles Addams, has been adapted to the stage with the script written by Marshall Brickman and Rick Elice, of “Jersey Boys” fame.   The songs by Andrew Lippa of “You’re A Good Man, Charlie Brown” and “Big Fish” fame are funny, fun, and full of life.  Before the stage musical version, however, you may recall the 1960’s version of “The Addams Family,” starring Baltimore native John Astin as Gomez.  A popular series of movies in the 1990’s has also been made, starring Raúl Juliá as Gomez and Christina Ricci as Wednesday.

…creepy and kooky fun for the entire family.

Directed by Jonathan Jackson, “The Addams Family” is just your ‘average’ and, yes ‘normal’ family. I mean, what family doesn’t have their own collection of antique torture devices!?  And, just like the Addams, you hope for “darkness, grief, and unspeakable sorrow.”  This type of tongue and cheek humor is what you will find throughout this dark, musical comedy that is creepy and kooky fun for the entire family.

In this live stage version, the story is about Wednesday (Jayne Saxon Zirkle) who wants her parents blessing before getting married to Lucas Beineke (Will Hooper).  Sadly, Lucas is every parent’s worst nightmare!  You see, he is a sweet, smart young man with a respectable family from Ohio! So, after Wednesday tells her father, Gomez (Kieth Flores) of the engagement, she asks him to keep the news secret from her mother, Morticia (Nina Jankowicz) until after they have “one normal night” with the Beineke family; Mal (George Willis) and Alice (Libby Dasbach).  On this ‘normal night,’ both families will be putting their best foot forward as they meet each other for the first time.  What happens at their evening of dinner will change everyone’s lives forever!

From leading role to chorus member, all the performances are to die for! Kieth Flores as Gomez, the patriarch of the family, looks debonaire with his dark suit, dashing grin, and attractive Latin accent.  Gomez is always doting on his wife, and there is no wonder why. Nina Jankowicz as Morticia is a goth wife and mother who  finds the right balance between being sarcastic and sultry, yet appropriately blasé. And she sings well, too!

Jayne Saxon Zirkle as the ultimate princess of darkness, Wednesday, shines vocally, especially during the song “Pulled,” where she is being pulled in a new direction where she is starting to even like “sunrise in wide open spaces.” Jackson Parlante is convincing as Pugsley, the little brother of Wednesday, especially when expressing his jealousy over Lucas. Steve Dasbach is lovably strange as Uncle Fester while Lani Novak as Grandma receives laughs with her funny quips. And Patrick Boyer is perfectly cast as Lurch, the tall butler with a deep voice.

The sets, designed by Dream Team Productions are functional and feature the Addams family home which included a staircase and a few paintings. The ensemble made use of portable wooden trees throughout the show. I would have liked more details put into the design of the sets and props. For example, more spider webs around the home and more detail in the painting of the trees, to name just a few. Also, the stage has no wing space, causing multiple issues like set storage, limited entrances for performers, and stage hands having to operate devices from the side of the audience.

Other production values include the appropriately dark costumes by Crystal Soul, wigs by Jonathan Jackson, lighting by Devante Evans, and sound by Terry Edwards. Also, the makeup design (uncredited) is splendid and included plenty of dark circles under the eyes.  Most impressive is the makeup for the Addams Ancestors who have ghostly white and black features to great effect.

The choreography by Jonathan Jackson is simple, yet stylized. It was a joy to watch the Addams Ancestors move artistically about the stage, peering from behind trees. Each seemed to have their own character; one appeared foolish with dumb facial expressions, while another must have been a ballet dancer.

The live orchestra, conducted by Paul Rossen is WONDERFUL! With ease the orchestra played in a variety of styles, adding to the overall enjoyment of the Tantallon Community Players production. Special shout-out to Melissa Bayliss on the trombone, Franklin Wade on the trumpet, and Melody Flores on the violin.