Theatre Review: ‘The Painted Rocks at Revolver Creek’ at MetroStage 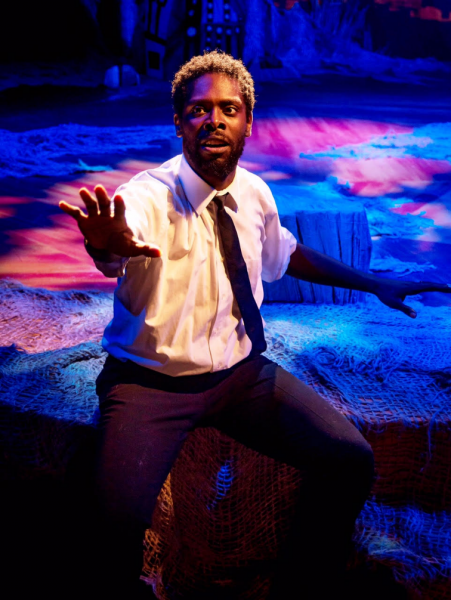 Jeremy Keith Hunter as Jonathan Sejake in “The Painted Rocks at Revolver Creek” at MetroStage.

Inspired by the work of outsider artist, Nukain Mabuza, South African Playwright, Athol Fugard offers the audience an intimate look into the stories of three South Africans whose lives, by virtue of race, have been shaped by Apartheid in vastly different ways.

Nukain (Doug Brown), born into apartheid South Africa, has spent his life walking the roads in search of work, performing back-breaking labor, and for decades, beautifying his surroundings with “flowers,” the rocks he paints in bright colors that dot an Afrikaner’s farm.

Go see this play.  Cry with Bokkie, rage at Elmarie, and feel the hope that Jonathan inspires for a day when every person, each complicated and uniquely wonderful human being, will be seen.

Now facing death, Nukain has saved the largest rock for last.  Twelve-year-old Bokkie (Jeremiah Hasty), his assistant, watches as Nukain overcomes his fear of the “big one” to paint not a flower, but his life story.

Elmarie Kleynhans (Marni Penning), an Afrikaner farmer’s wife, appears soon after the painting is completed, oblivious to its meaning.  She demands that Nukain paint a flower in its place.  The youthful Bokkie defends Nukain’s work, angry at both Elmarie’s demand and Nukain’s acquiescence.

In an expression of anguish that conveys a lifetime of humiliation at the hands of Afrikaners, Nukain defends his actions to Bokkie.  Standing before the big, bold eyes of his final painting, Nukain cries out, “They have eyes, but they do not see us.”

Twenty years later, Bokkie, now an educated man known by the name of Jonathan Sejake (Jeremy Keith Hunter), returns to the farm to restore Nukain’s artwork.  He is greeted by a fearful Elmarie wielding a gun.  She does not recognize the adult before her, nor does she immediately lower her weapon when Jonathan identifies himself as her former farm hand.  A passionate dialogue ensues, one that illuminates each individual’s struggle to make peace with the past and adapt to an evolving post-apartheid society.

Directed by Thomas W. Jones II, the emotionally riveting production features a superb cast.  Doug Brown (Nukain) embodies a character who has seen and suffered much.  His despair at Elmarie’s order to destroy his artwork brought, I think, the audience to tears.  Nukain’s assistant, Bokkie, played by Jeremiah Hasty is a young actor to watch.  Already a veteran of the D.C. theatre scene, he successfully communicated the character’s wonder, frustration, and anger.

Not a sympathetic figure by any means, Marni Penning manages to embody the arrogant and self-absorbed Elmarie, while also demonstrating the tragedy of a life lived with such disregard for her fellow humans.  And, in an unforgettable portrayal of Bokkie’s adult self, Jeremy Keith Hunter (Jonathan Sejake), passionately conveys the reality of his experience as a black man in South Africa to a defiant and bewildered Elmarie.

Patrick W. Lord’s (Set and Projection Design) set lives and breathes, featuring the requisite brightly colored rocks, along with subtle background appearances of a clothesline on a breezy day, wheat blowing softly in the wind, and a view of the expansive South African countryside that imparts a certain immediacy to the onstage action.

Go see this play.  Cry with Bokkie, rage at Elmarie, and feel the hope that Jonathan inspires for a day when every person, each complicated and uniquely wonderful human being, will be seen.