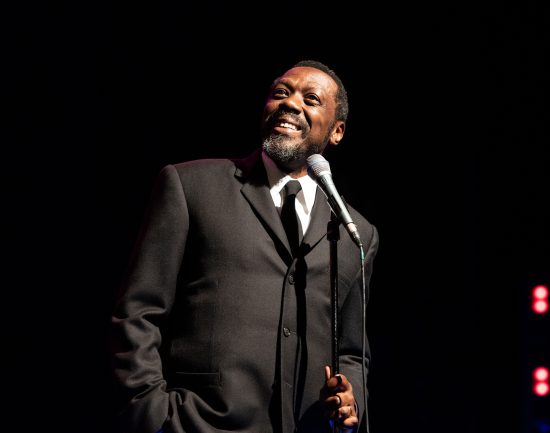 It’s not often that a performer has a biopic written for him while he can still go view it.

The pioneering comic and civil activist Dick Gregory had the chance to do just that last year in New York before he passed on, at age 85. With some subtle updates, we are treated to this evenhanded portrayal of a man of uncompromising principles and unparalleled drive. “Turn Me Loose,” presented at DC’s Arena Stage, is an evening filled with punchlines and stark realities of our collective past, seen through one man’s journey.

The result is culturally engaging, but also emotionally compelling from first joke to last refrain.

A performer who crashed the mainstream comedy circuit of the 60s and 70s, where no blacks had previously dared or were unable to break in, Gregory had an easy manner and subtle quips that, in his early years, teased the audiences about his observations of growing up black in the South. His gift of storytelling lent him to paint with a gentle brush while still supplying satire. His later, more strident work followed out of his political activism, born of the civil rights movement.

What makes the show work is its fluid nature, built around Gregory’s onstage performances. The brainchild of playwright Gretchen Law, she has taken on the task of portraying the comedian/activist at various stages of his controversial, roller-coaster career. The result is culturally engaging, but also emotionally compelling from first joke to last refrain.

It is, indeed a built-in pleasure—listening to accomplished Broadway presence Edwin Lee Gibson sidle up to the mic and casually drop comic one-liners. “Segregation is not all bad. Have you ever heard of a collision where the people in the back of the bus got hurt?”

Gibson’s performance is indelible. It seems like he put on the iconic black suit of Gregory and became the man. Similar in many mannerisms, but not a mimic, he shows Gregory’s confidence and easy manner onstage, juxtaposed by his challenges and demons offstage.

The show is a swirl of onstage appearances and somber asides where the inequality he sees around him grind at him incessantly. He recounts early on his he was once accused of touching a white woman’s leg while shoe shining, and had his front teeth knocked out. From dealing with an abusive alcoholic father to not being able to stay with the other students on the track team hotel, his painful past emerges.  “Last time I was down South I walked into this restaurant and this white waitress came up to me and said, “We don’t serve colored people here.” I said, ‘That’s all right. I don’t eat colored people. Bring me a whole fried chicken.’”

Gregory had eleven…count ’em, eleven children, with which he had little connection with, aside from an occasional drop by between his hectic touring schedule. His father abandoned his family, leaving his mother, who he credits as a wonderful role model, to raise the family.

In the early scenes of “Turn Me Loose,” Gibson plays a young Gregory, an up and coming act on the trail of traditional nightclub gigs and hoping for television stardom. But the bulk of the show focuses on his later wizened Gregory, a man refusing to bow to the slowness of change, looking for a few more injustices to knock down. The two-man show has the talented John Carlin covering the myriad roles as stagehand, audience, heckler, a warm-up comic, and in a hilarious scene, a pompously affected and out of touch interviewer pulling some of Gregory’s past quotes and trying to understand his passion.

All of the milestones of his life are covered—his first break getting to perform at the Playboy mansion, his standing up to Jack Paar on The Tonite Show, only agreeing to appear if he gets to be interviewed ‘on the couch’, the march at Selma, Alabama, his work with Medgar Evers, and the heckling that he endured at nightclubs for being black and for bringing up the subject of race and civil rights.

He spoke to one heckler from Alabama, saying each time you say the N word I get $50. When another bigot called him to say he was glad Dick Gregory’s son died, Gregory said he had taken a million-dollar insurance policy out on his son just the day before. Lemons from lemonade.

Directed by John Gould Rubin, “Turn Me Loose” moves at a razor-sharp pace. Edwin’s performance recreating Gregory’s famous lines exhibit impeccable timing and the audience lapped it up. His tender pacing had a rhythm all its ow, and resonated with social concern without being strident.

The modest staging of this production, reflecting most naturally the background of a nightclub, fit well in a biopic of a man laying bare his soul. Original show Designers Chris Barreca (settings) and Stephen Strawbridge (lighting) utilize the architecture of the theater’s interior to evoke Gregory’s on-stage and real life worlds. His later moments combined biting humor with the message social change:

“Just being a Negro doesn’t qualify you to understand the race situation any more than being sick makes you an expert on medicine.”

“I wouldn’t mind paying taxes – if I knew they were going to a friendly country.”

“I went to Ethiopia, and it dawned on me that you can tell a starving, malnourished person because they’ve got a bloated belly and a bald head. And I realized that if you come through any American airport and see businessmen running through with bloated bellies and bald heads, that’s malnutrition, too.”

His life story a journey of a man in full, from comedy to marches to nutritional supplements, yet never reaching a sense of contentment. The burning desire to make a difference in ‘the movement’ overtook him to his dying day. In this, there is a measure of triumphant pathos.