“Please don’t miss this show. We owe it to ourselves to enjoy 4 hard working actors make magic on the stage.” – April Forrer.

Synopsis: A rigid boys boarding school becomes the setting for a powerful and unorthodox reenactment of Shakespeare’s immortal tale of doomed lovers breaking tradition, seeking forbidden desires, and painfully coming of age. This high-voltage, all-male adaptation of Romeo and Juliet becomes a provocative examination of adolescents declaring war on all the “thou shalt nots” in their stifling world. 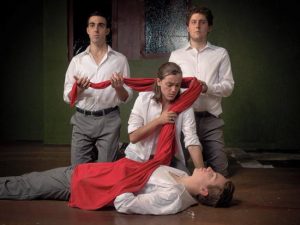 “…will keep you engaged and enchanted until the final bow. ” – Mark Dreisonstok.

Synopsis: With songs like “Some Enchanted Evening,” “I’m Gonna Wash That Man Right Outa My Hair,” and “Bali Ha’i” South Pacific is one of the most beloved of American musicals – and Olney Theatre Center has never tackled it! Set on a remote Pacific island during World War II, South Pacific gave us the unforgettable love story between nurse Nellie Forbush and French expatriate Emile de Becque, a love threatened by war, as well as the dark corners of Nellie’s soul. Rodgers and Hammerstein’s 1950 Pulitzer Prize-winner was ahead of its time with its unflinching look at racism and prejudice that, sadly, still resonates today. Featuring Jessica Ball (Guys and Dolls) as Nellie Forbush. 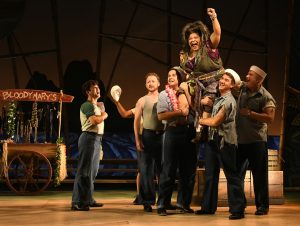 Cheryl J. Campo and the cast of South Pacific. Photo by Stan Barouh.

3. ‘Dancing at Lughnasa’ at Everyman Theatre.

“A beautifully written story coupled with a fantastic cast and a touch of history warrants a recommendation to all who adore fine stage plays.” – JV Torres.

Synopsis: Irish master storyteller Brian Friel casts a nostalgic and transportive Tony Award-winning tale of five unmarried sisters and a household framed by their strength and persistence, where “anything goes”—until it doesn’t. Step back in time to the summer of 1936, and a small Irish village, where Michael recalls pennies pinched, hopes hindered, and love thwarted during a life-changing moment in the Mundy family’s world—where a new radio, a homecoming, and the festive season for dance conjures a ravishing spell of ritual, remembrance, and the Chekhovian riddle of whether “memory” is something one has… or something one has lost. 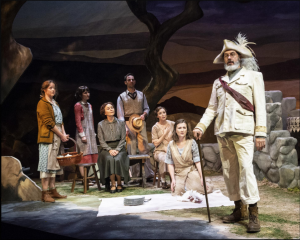 4. ‘The Painted Rocks at Revolver Creek’ at MetroStage.

“Go see this play.  Cry with Bokkie, rage at Elmarie, and feel the hope that Jonathan inspires for a day when every person, each complicated and uniquely wonderful human being, will be seen.” – Jeannette Mulherin.

Synopsis: Inspired by the life of outsider artist Nukian Mabuza, Fugard depicts both the brutality of apartheid in the 1980’s and the violence and engrained patterns that have impacted the post-apartheid in South Africa. The painted flowers and images of the rocks dotting the fields represent an abstract vision of this painter’s life. And the interaction with the wife of the farm owner clearly depicts South Africa yesterday and today as it struggles to reconcile its past and its future. 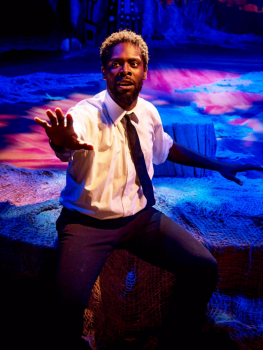 Jeremy Keith Hunter as Jonathan Sejake in “The Painted Rocks at Revolver Creek” at MetroStage.

“Performed intimately in the round, the best thing about ‘Rumors’ is the palpable, infectious energy of its ensemble cast.” – Kristen Waagner.

Synopsis: At a large, tastefully-appointed townhouse, the Deputy Mayor of New York has just shot himself. Though only a flesh wound, four couples are about to experience a severe attack of farce. Gathering for their 10th wedding anniversary, the host lies bleeding in the other room, and his wife is nowhere in sight. His lawyer, Ken, and wife, Chris, must get the story straight before the other guests arrive. As the confusions and miscommunications mount, the evening spins off into hilarity. 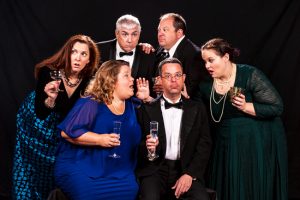