‘A Quick 5’ with Harvey Williams 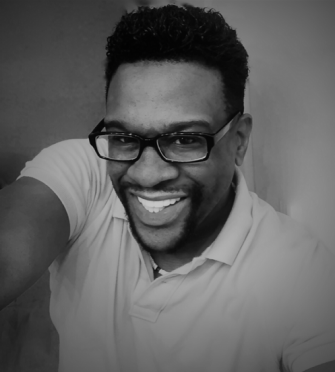 Bio: Harvey Williams is enjoying his first time with the Twin Beach Players. Harvey is also known for his other roles as Sky Masterson in the musical “Guys and Dolls” and the Cowardly Lion in the Philadelphia production of “The Wiz”, to name a few. He has also appeared in several TV shows and independent films. Harvey studied acting at the esteemed Walnut Street Theater in Philadelphia. He is a singer, dancer, musician, avid reader, and photographer. Harvey would like to thank his lovely wife Donna for her support and encouragement in helping him chase his dreams!

What has it been like to bring to life an acclaimed classic novel on stage?

It’s been a dream come true. My father first introduced me to the film when I was young and then, when I was a little older, I was given the novel as a gift to read. I have loved “The Time Machine” story all of my life. The novel has been brilliantly adapted by playwright Mark Sharf for the stage.

How have you grown as an actor through portraying George?

This role has really made me stretch and work my acting muscles like I have never had too before. Playing George has allowed me to play a great range of emotions: from a silly/excited wonderment to extreme fear, anger, and heartache. A lot of roles I’ve have had to play have been one dimensional. Comedic side kick, tough gangster, or leading love interest. I wasn’t able to move too much within the boundaries of those characters. But portraying George, I’ve had to dig deep into all different types of emotions in the span of less than two hours. With the help of our amazing director Regan Garnett, I was able to bring out all of these emotions within one play that I never played with before. I’m definitely a better actor now because of working with her and this amazing cast.

What has been your favorite part of being in “The Time Machine?”

To be honest, I have more than one. First, working and learning with the amazing actors that are in this play with me. I can’t tell you how much they have helped me to become a better actor! Second, getting the audience invested in the journey of traveling through time with George. Having them feel and experience his ups and downs and his sense of wonderment while traveling through time – I love hearing the audience gasp at every show when his machine is stolen from him! The empathetic response is overwhelming. They know he is in trouble and they now care about George and want him to be safe and to succeed. 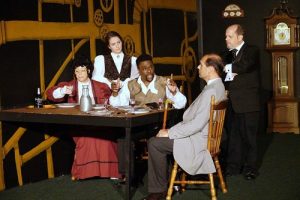 Do you believe that the message of this story is applicable today? Why or why not?

Yes, I do believe the message of this story is applicable today. I am by no means a scholar on the story but what I take away from the story, and what Mark adapted from the novels, is that we must be mindful of all three times in the space-time continuum: the past, present and future. The past; we must study it and learn from it so as not to repeat past mistakes. The present; we must be mindful of the effects we have right here right now. What we are doing now affects the planet and future lives. The future; we must look to the future for hope and peace and for better days for all living creatures on this planet we all call home.

If you could have a time machine, what period in time would you want to visit? Why?

The future! Right now things are tense and uneasy. There is political and social unrest, and real tension today. Seems like this world and the people on it are coming apart, and it looks bleak now.  I remember complaining to my mom and dad and they said that things used to be a lot worse in their day and their parents day. A lot worse, but it did get better over time. I know things will be better in the not too distant future. I have faith in mankind to always do the right thing. But here’s a little secret. The time machine in the play is real. So I took my time machine to the future to have a little sneak peak of what’s to come. And guess what? Spoilers!!! The future is amazing!!