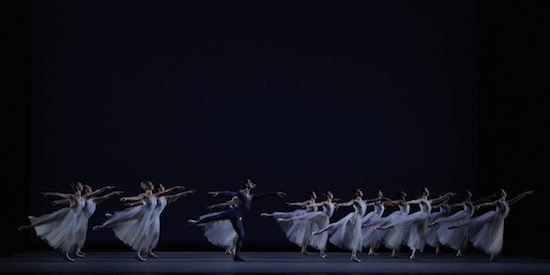 The Washington Ballet in Serenade. Photo by XMB Photography.

The Washington Ballet opened the 2018-2019 season with “TWB Welcomes,” a welcome both to the company’s audience and to the four guest dancers from the American Ballet Theatre, the Houston Ballet, and Ballet Manila. The performance, consisting of two separate programs A and B, featured guest artists Stella Abrera, Marcelo Gomes, Connor Walsh, and Katherine Barkman. The vision, artistic director Julie Kent explained, was to juxtapose a classical ballet (“Serenade” or “Les Sylphides,” depending on the night) and a contemporary ballet (“Bolero” or “Sombrerisimo”) with pas de deux in between. This review is of Program A.

Choreographed by George Balanchine, “Serenade” was beautiful, as every production of “Serenade” is always beautiful, can’t help but be beautiful — the ice blue costumes, the Tchaikovsky score’s strings, the opening tableau of sixteen ballerinas with right arms raised, hands angled as if to block the sun. Measure by measure, the dancers responded to the tones of the music played by the Washington Ballet Orchestra, conducted by Charles Barker, morphing into new formations — a double diamond, a zig-zag — like chameleons to the sound.

But the corps de ballet seemed, at times, to be holding back. For instance, a signature motion of “Serenade” is the (informally named) scissor arms. The dancer holds her arms out in front and swish them up and down, up and down, like a pair of clippers; tonight these seemed not quite as sharp as possible. Another defining movement is the dancer bringing her wrists together in front, head bowed, and then flinging her arms wide as if parting drapes on a bright day; she opens her chest to the sun before folding forward again, snapping her wrists back together in front. Again, the corps appeared to be holding back, merely moving their arms, not opening themselves to the light. To borrow a phrase from New Yorker critic Joan Acocella, that “sense of life’s old story” was missing in these moments, in the slivers of choreography that make “Serenade” magical.

But soloists EunWon Lee and Gian Carlo Perez danced with abandon. Loose and playful, the two looked happy to be onstage, happy to be dancing. They smiled at each other, and their ease with each other meant an ease for us, the audience. We could rest in their virtuosity and delight in their unfolding duet, freed from worrying Lee would lose her footing or Perez would miss his mark. And when they danced onstage with the corps, everyone seemed to smile and sparkle.

Tamako Miyazaki and Andile Ndlovu danced Balanchine’s “Tarantella,” set to a jazz-like score by Louis Moreau Gottschalk, a New Orleans-born composer of the mid-19th century. Of the piece, choreographer Balanchine wrote that he hoped the dance reflected the dazzle, speed, and high spirits of the composition. He added, as if an afterthought, “The costumes are inspired by Italy, anyhow, and there are tambourines.” Indeed, there were tambourines — though at times they sounded slightly off-beat from Barker’s orchestra, Miyazaki and Ndlovu danced with eagerness.

Following the flashiness of “Tarantella,” the First Pas de Deux from Alexei Ratmansky’s “Seven Sonatas” felt especially serious, hushed, and sober. Sona Kharatian and guest artist Marcelo Gomes danced against a hazy purple backdrop, accompanied by piano soloist Glenn Sales at a black grand piano onstage. Their relationship — in a pas de deux, some kind of relationship is often implied— seemed complicated. In a moment, he would twirl her, and she would lean into him. In the next, he would turn away and pace across the stage. Half a measure later, he would turn back and pick her up, and she would lean into him again, adoring and pained. Especially in our current political climate, the effect was haunting. At the end of the piece, Gomes gently lifted Kharatian up and carried her into the wings, her pointed feet dragging lightly along the stage.

The power dynamic shifted with the final two pieces, the Pas de Deux from “Swan Lake Act III” and “Bolero.” In the former, anti-heroine Odile (guest artist Katherine Barkman) deceives Prince Siegfried (Rolando Sarabia) into believing she is the Swan Queen whom he truly loves. Barkman’s Odile was coy and confident, determined. She completed the notorious 32 fouettés (“whipped turns”) of “Swan Lake” while Sarabia’s Siegfried looked on admiringly; her swan-like ports de bras was remarkable. In the end, Odile succeeds in duping Siegfried — a victory for women, perhaps, but not quite a satisfying one. When Siegfried kissed Odile’s hand, he betrayed the Swan Queen.

“Bolero,” choreographed by Alexei Ratmansky, equalized the male and female roles, in a sense. Each dancer wore a number, 1 through 6. Partners were mixed and matched; no ballerina appeared to dance more or less with any particular danseur. No one got too close, no one became too intimate. But something, some real and human element, was missing. Not from the performers themselves (they danced well, with vigor), but from the story, the sense of the piece.

The sense of trusting partnership so beautifully evident at the beginning, in the choreography and dancing of “Serenade,” had disappeared by the final act. In its place was either a lack of empathy or the lack of intimacy between the characters, Woman and Man, that each pair came to embody. In the last, loud notes of Ravel’s score, each male “Bolero” dancer picked up a ballerina and cartwheeled her in his arms, back and forth, like windshield wipers or the arm of a revving speedometer. An impressive show of strength on his part, coordination on hers — but jarring to watch.