Dance Review: ‘Unbound: A Festival of New Works’ at The Kennedy Center 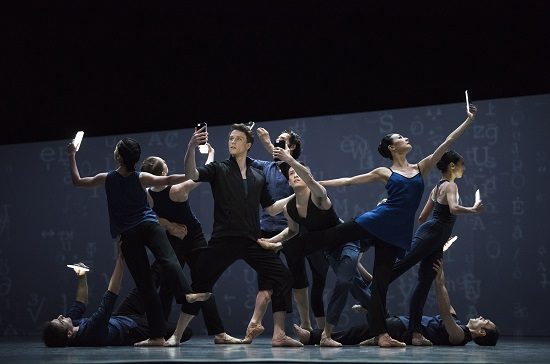 Christopher Wheeldon’s “Bound To” captures the wonders of technology in dance…and the madness of its addiction. Photo © Erik Tomasson.

Helgi Tomasson, Artistic Director and Principal Choreographer for the San Francisco Ballet, deserves a Kennedy Center Honor. Yep, the Icelandic native (with a lifelong devotion to ballet) not only has his thumb on the pulse of contemporary dance – he knows what the audience wants to see – but then pulled off a series of new works that represent the best and brightest from international artists. Last evening’s Program A of his “Unbound: A Festival of New Works” featured three dances by three distinct choreographers, best described as “a joyous homage to youth.”

Two years ago, Tomasson came up with the idea of 12 choreographers showcasing 12 new works over a period of 17 days at the home-based War Memorial Opera House. ”We wanted to try something never done before,” the director said in a podcast recorded at the Kennedy Center. “We wanted to challenge ourselves and the audience…change where you think it was going.” His idea was to keep the sets unpretentious and to use James. F. Ingalls’ imaginative lighting for every dance created. The musical scores were to be as varied, among them classical, techno and folk songs from Appalachia.

…a series of new works that represent the best and brightest from international artists.

Unfortunately for critics and serious balletomanes (many in the audience last night) plus those who enjoy the contemporary take on ballet, only six of the original 12 commissioned works are scheduled in the seven shows at the Kennedy Center through Sunday afternoon. Let’s hope the longtime director of America’s oldest ballet company returns to DC soon to present the remaining six works from these creative minds, especially Christopher Wheeldon who created “Bound To” for the festival, placed midway in Program A.

One of Wheeldon’s gifts is his ability to make lovely, quiet dances, especially when the ballerinas wear soft shoes and flowing lingerie in the dreamy variations, a trademark of the British choreographer. In “Bound To,” Wheeldon took a leap into the subject of grief caused when we loose the human touch. The main prop in this oh-so-topical piece is an illuminated iPhone, secured inside costumes or held by all 14 dancers, thanks to the creative scenic and costume design by Jean-Marc Puissant.

Puissant’s projection design with Alexander V. Nichols immediately put us on edge as zillions of cellular data jumps on the scrim behind the dancers. The frenzy settles down a bit when Lonnie Weeks opens and closes demonstrating athletic agility and a longing for that someone to connect without a device. Dancers weave in and out of formations and same-sex encounters. Others hang near the wings, their eyes glued to that familiar shining light. Martin West conducts live musicians in an eclectic score by Keaton Henson, first a jarring electronic selection, traditional piano music, and a finale so sweet the memory lingers on.

The selection of music to accompany the dancers is a huge part of the first program – and I suspect for the second one also, since Helgi Tomasson, a protégé of George Balanchine, carries on the tradition of the master’s penchant for picking great composers to accompany his dancers. Expect some interesting musical compositions in the second part of the San Francisco’s engagement at the Kennedy Center. Justin Peck’s “Hurry Up, We’re Dreaming” features four composers: Anthony Gonzalez, Yann Gonzalez, Bradley Laner, and Justin Meldal-Johnsen.

Choreographer Trey McIntyre choose to honor his grandpa in Program A’s opening dance, “Your Flesh Shall Be a Great Poem,” set to a folksy score with a mix of old-fashioned wit and humor. Or was it political satire? The closing dance, “Anima Animus” by European choreographer David Dawson, features a gorgeous rendition of Ezio Bosso’s Violin Concerto No. 1 “Esoconcerto.” Kudos to violinist Cordula Merks for enhancing the playful movements of the dancers.

Though the San Francisco Ballet appears well trained and well rehearsed, yet another trait of the director from his Danish and New York training and performing, a few standouts should be noted. With his deadpan facial expressions and jump-for-joy antics, Benjamin Freemantle owns Trey McIntyre’s tribute. Isabella DeVivo and Steven Morse catch our attention in a pas de deux (do you still call it that in a modern ballet?) and I love the acorridian musical accompaniment as the entire company displays a joy rarely seen these days. It reminds one of a Paul Taylor Dance Company romp.

San Francisco Ballet: 2 Programs of East Coast Premieres from “Unbound: A Festival of New Works” plays through Sunday, October 24-28, 2018, in the Opera House at The John F. Kennedy Center for the Performing Arts – 2700 F Street NW, in Washington, DC. For program information and tickets call the box office at toll free 800-444-1324 or go online.