Interview: ‘Beetlejuice’ Dream Team Talks About the New Musical at The National Theatre 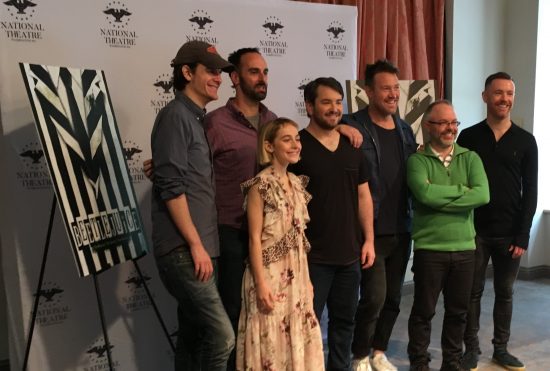 Move over Stephen Sondheim. There’s a new kid on the block. And, he’s coming to Broadway with some musical ideas to shake up The Great White Way. Eddie Perfect (yes that’s his real name) is one of Australia’s most diverse, and prolific composers, though he’s little known in the States. This should change when word gets out on his latest task, composing a score for the new musical, “Beetlejuice,” debuting at the National Theatre and guaranteed to tickle your funny bone.

Indeed, It’s the age of Millennials making musicals – think “Hamilton” or “Mean Girls,” which also previewed at the National before its successful Broadway run. So take note Broadway veterans, then cheer on those young, talented writers, actors, directors, choreographers waiting in the wings.

The folks behind “Beetlejuice” have taken gathered a “dream team” for the show. This production, based on Tim Burton’s wildly funny film, will speak to all ages, but especially to those who grew up in the ’90s watching the super heroes and comic strip characters that came to life on the big and little screens.

From conversations with seven of the cast and crew, this musical captures both the wit and humor of the movie yet adds even more hilarity and craziness with its techno sets, costumes and fancy dancing.

Which brings me to the three questions: “When did the show come together?” “What makes this show fun?”  “How smoothly has it gone?”

Scott Brown (Book) and Anthony King (Book) met in junior high school in North Carolina and worked together on TV and Broadway where they first connected with Alex Timbers (Director) in a comedy called “Gutenberg/The Musical.” They are bright, energetic and deliberate in answering questions. Both have television careers in comedy and drama along with the hopes of other Broadway ventures.

“For me, the most exciting thing about this show was getting to play in Tim Burton’s world,” said King with a broad smile and twinkle in his eye. “We grew up with these characters and I love that Batman was seared into our brains,” added Brown.

As for the process, Brown said it best, “It’s been a long journey, but once Eddie Perfect came on board,” “It started to feel real and from there has been incredible.” When asked if there was a political bent to their writing, King smiled and said, “Darkness is a great skill to have right now.”

Asking a choreographer to describe the dancing is difficult cause you just want to get up and move about. So Connor Gallagher and this former showgirl pulled off a few dance steps during our conversation. His background is extensive, having worked with the greats. The lithe, blonde dancer/choreographer worked on dozens of shows on and off-Broadway, choreographing for Timbers, too.

“There’s a real mix of dance. The choreography is eclectic with some modern moves, up-to-date Broadway dancing and acrobatic touches (his forte). And he emphasized, “The movement must always serve the score.” Gallagher also paid tribute to the musical director when he said, “Hearing the score for the first time inspired me to dream big.”

Director Alex Timbers appears to be having a good time with “Beetlejuice.” He’s young, handsome and has a bent for popular culture. Yet he doesn’t want to be called a copycat of the film. For him, it was the first movie where he saw Burton’s signature – the look and vibe of the characters. What’s important to Timbers is to reach beyond.

“No one wanted to put the movie on stage,” he emphasized during our short talk at the National. “It was his (Burton’s) visual signature, so we needed to take a new direction, especially in the second act. Timbers, who grew up in New York City and was smitten by the musical, “Tommy,” seeks a direct relationship to the popular culture.

“We started this project eight years ago, working in a bunker together with the writers, but it didn’t come together for me until I heard the musical score,” Timbers said, admitting there were tears in his eyes. 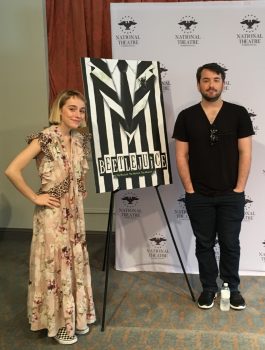 Alex Brightman (Beetlejuice) and Sophia Anne Caruso (Lydia) are delightful young actors who, too, have credentials that go on forever. I had the privilege of reviewing Caruso in “Little Dancer” at the Kennedy Center a few years back. Others might remember her as Brigitta Von Trapp in NBC-TV’s first live TV musical, “The Sound of Music Live!” Online fans know her from “The Girl” in the David Bowie/Enda Walsh world premiere.

Brightman, who is perhaps best known for his portrayal of Dewey Finn in Andrew Lloyd Webber’s hit musical “School of Rock” and scores of other accolades – check the program. He’s a doll and fun to ask his about what’s fun for him.

“It’s been by far the most fun I’ve had since ‘School of Rock,'” admits Brightman, who grew up in California but calls New York his home. Caruso, pretty and quiet, admits she laughs a lot at the rehearsals.

“My co-star makes he chuckle every time he comes on stage.”

Still my nod goes to Eddie Perfect a totally original guy who laughs easily and makes everyone feel comfortable.

“It’s been a very strange path that has led me this way. I left Australia with my wife’s push for me to go to Broadway. So I did it. I called on every single contact. It was burning inside me to make it on Broadway.”

The 30-something burly musical genius continued,  “I felt as if I walking around with my face pressed up against the glass. Finally I called my agent when I heard ‘Beetlejuice’ was looking for a score…the rest is history.” His mentors include his uncle, a piano player who learned music by ear, and a recording of “Sweeney Todd.”

Yes, he did get to” to meet Stephen Sondheim.

“Beetlejuice” will have a limited five week engagement at the National Theatre, 1321 Pennsylvania Avenue NW, Washington, DC this Sunday, Oct. 14 through Sunday, Nov. 18, then head to Broadway at the Winter Garden Theatre, 1634 Broadway, New York) with previews beginning in March, 2019. For more information, visit online. 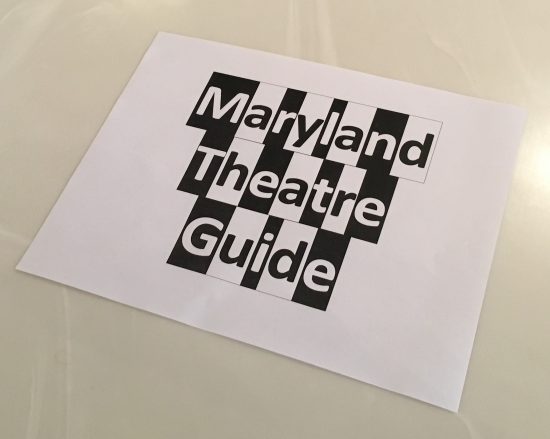