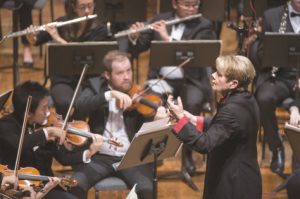 Joining the worldwide celebration of the centennial of Leonard Bernstein’s birth, the Peabody Institute of the Johns Hopkins University presents Bernstein’s uniquely dramatic, evening-length concert work MASS: A Theatre Piece for Singers, Players, and Dancers for one night only on Friday, October 26, at 7:30 pm. Not performed in Baltimore since 2008, Bernstein’s MASS brings together hundreds of performers from across the Baltimore community in a musically eclectic exploration of truth, faith, and what we can believe in.

Loosely framed on the structure of the Latin Mass, Bernstein’s MASS blends theatre, dance, and musical styles ranging from classical to rock, blues, gospel, and jazz. Themes of faith, individuality, peace and protest, questioning authority, and cultural tensions propel the work as the central role, The Celebrant, comes to grips with dissent in his congregation. Bernstein was commissioned to write the MASS for the 1971 opening of the John F. Kennedy Center for the Performing Arts in Washington, D.C. It is both a reflection of those turbulent times in American history and a timeless and profound affirmation of Bernstein’s belief in the power of peace.

“Bernstein’s MASS is ultimately about belief – where to believe, whom to believe, whether to believe,” notes Peabody Opera Theatre Managing Director Samuel Mungo, who directs this performance. “So many of our institutions today are being questioned on their validity. The media and fake news, our government and alternative facts, our churches and sexual scandals. It has never been harder to find a place to rest your faith in what to believe, what is true. In the end, I believe Bernstein would say we can look to ourselves, and each other, trusting in the better angels of our nature.”

Marin Alsop, director of graduate conducting at Peabody and music director of the Baltimore Symphony Orchestra, conducts this performance, which marks her final performance of the MASS in Bernstein’s centennial year, following acclaimed performances of the work in London and at Chicago’s Ravinia Festival.

“This is a piece that embraces and unites, bringing together hundreds of performers of all ages and backgrounds, to work together toward a common goal,” says Alsop, who worked closely with Bernstein early in her career and considered him a mentor and friend. “It is Bernstein’s ultimate narrative reflecting his deep faith in the goodness of humankind and his belief in our extraordinary potential when we join together in unity.”

“In a season of highlights, I am especially excited about this performance of Bernstein’s MASS, which is a theatrical and musical spectacle unlike anything else – a genuine ‘event’,” notes Fred Bronstein, dean of the Peabody Institute. “Moreover, it’s a piece that is striking in its power, its timeliness, and relevance to the social issues of today and where we find ourselves as a citizenry.”

The Peabody Institute’s October 26 performance of Leonard Bernstein’s MASS will be staged at the New Psalmist Baptist Church, 6020 Marian Drive in Baltimore. Tickets are $45 or $15; seating is general admission within the tiered pricing sections. For tickets, call the box office at 667-208-6620 or visit peabody.jhu.edu/mass to reserve tickets online.