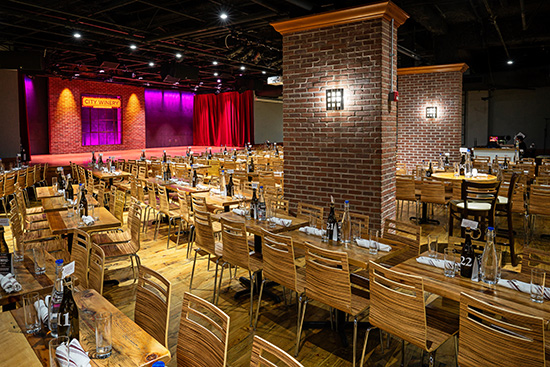 Partway through his set at City Winery, Tim Reynolds, frontman of his trio, TR3, addressed the audience, thanking the venue for its hospitality. “We enjoy playing City Wineries,” Reynolds shared in his quiet voice. “We get to play some mellow stuff, some loud stuff,” he said. “Some drunk stuff,” he joked, wryly.

Reynolds’ aside captures a key element of City Winery’s success; the variety it offers both its artists and audience. Variety (and varietals) that can be enjoyed in comfortable, high-end surroundings.

The audience for TR3 enjoyed the group’s fusion of rock, jazz and samba in the congenial atmosphere of the venue’s main stage. In the 300-seat concert space—which doubles as a dining area and includes a bar—the back-row audience members could experience the feeling of an elegant concert venue, while front-row fans got the more intimate connection of a coffee shop performance.

The dynamism of the space certainly brought out the best in Reynolds’ quiet humor and virtuosic guitar playing. Alternating between electric and acoustic sounds, Reynolds’ “loud stuff” and “mellow stuff” sounded equally at home in the venue.

We’re the newest in a long line in D.C. that have left a mark. You just want to be remembered as the place that did well, and kept it fresh.

Founded by CEO Michael Dorf in 2008, the original City Winery opened in Manhattan, now one of six locations. Washington, D.C.’s City Winery opened in Ivy City in April of this year and has featured performers the likes of Suzanne Vega and Patty Symth, as well as comedians such as Sandra Bernhard.

Hospitality is one of City Winery’s strengths, says John O’Neill, program director for the D.C. location. “We’re more upscale than a few places [in D.C.], larger than a few, smaller than a few,” he explains. The concept of a combined winery and music venue targets an audience of those who can’t get to as many shows as they once did, would still like to enjoy their favorite groups, but without having to “stand in a concrete building,” he explains.

The importance of hospitality extends to the performers’ experience as well, O’Neill continues. “The artists are walking into a really great sound, a really great stage,” he says. “We [at City Winery] are music fans first; some of us are in a band, or friends with someone in a band, or we have a crazy record collection.” O’Neill says one of the best parts of the job is checking in with performers. “The artists have known you for years and years, it’s an opportunity to be social and catch up,” he says. “The line between performer and person has been erased, and they’re just your friends.”

O’Neill says that the City Winery venues also offer established artists, like Suzanne Vega and Steve Earle, a chance to underplay, or play a smaller venue, when they could sell out a larger space. Both artists, like Tim Reynolds, play at several of the Wineries’ locations. It also offers the musicians a chance to sample from their repertoire more than they might be able to at a larger gig. “The artists get a chance to revisit yesteryear,” says O’Neill.

When booking performers, O’Neill says he wants to acknowledge D.C.’s rich music history. “I think about the H Street jazz corridor. The early R & B influence. Go-go and Dischord records. I try to reflect that” he explains. “We work with Jazz Fest – we think jazz is an important language, and we want to be involved with that,” he says.

The four floors of City Winery’s D.C. location also include a second, smaller stage with a different personality, the Wine Garden. Located upstairs from the main stage, the Garden is a more “anything goes” room for music events, according to O’Neill, featuring acts that are a little less traditional than the main stage. “We’ll do some rock and roll, some Go-go bands,” says O’Neill. “It can be whatever it wants to be.” That includes being an indoor/outdoor space that can also feature a dance floor.

While music still comprises the lion’s share of the venue’s acts, the schedule also shows an interest in innovating. “We like to mix it up, and give everything a shot,” says O’Neill. The main stage recently hosted Wasabassco Burlesque, a nationally touring troupe, as well as a comedians/magicians, Braden Carlisle and Tommy Halladay. December will see Jane Lynch, comedian and actress, performing songs from her Christmas album, “A Swingin’ Little Christmas.” Other upcoming musical acts include John Hiatt, Carlene Carter, as well as D.C. locals, the Blackbyrds.

In addition to finding its own success, O’Neill says that City Winery wants to honor the legacy of D.C.’s rich music scene. “We’re part of the continuum,” O’Neill says. “We’re the newest in a long line in D.C. that have left a mark. You just want to be remembered as the place that did well, and kept it fresh.”