Opera Review: ‘Figaro in Four Quartets’ by The In Series at GALA Hispanic Theatre 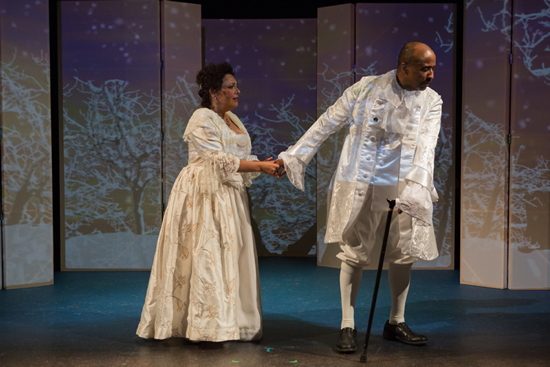 What do Mozart’s celebrated opera “The Marriage of Figaro” and TS Eliot’s masterpiece “Four Quartets” have to do with one another? “Figaro in Four Quartets” brings them together to tell a story of memory, transition, and love.

Each coupling had beautiful chemistry and all were beautiful singers.

Each coupling had beautiful chemistry and all were beautiful singers. Their voices blended and soared together. Each aria was well performed with depth of joy or pain and technical prowess.

The Poet, played by Brian J. Shaw, quoted Eliot’s words beautifully and with such a gentle tone. His soothing tone could settle the soul and ease the restless. Shaw wove the singing couples together and told their stories with Eliot’s words.

The set, designed by Jonathan Dahm Robertson, consisted of multiple large white panels that served as a projection screen. The projections added color and life to the piece. All of the singers were costumed in white so they too became part of the projection screen which heightened the sense of foggy memory (Costume Design – Donna Breslin).

This production is sweet and joyous. The audience gets to experience a journey through love and relationships. It is filled with nostalgia, looking back over our lives when we were in the spring and summer seasons of our lives. Some are looking forward to the winter years and some are there already. Either way, life and love are a beautiful adventure.

“Figaro in Four Quartets” by The In Series runs at GALA Hispanic Theatre through October 28. For tickets and more information click here.