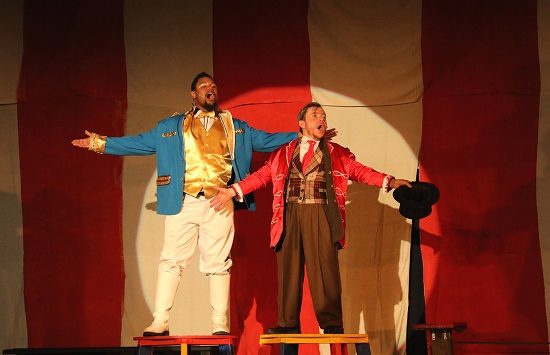 The past few years have not been kind to circuses.  The Ringling Brothers and Barnum Bailey Circus – the self-styled “Greatest Show on Earth” —  closed recently after 146 years in operation.  Still existing circuses, facing criticism for mistreatment of animals, have had to curtail many acts because of public disfavor.  Even the fabled Animal Crackers childhood snack has changed its packaging from caged animals in a circus train to animals free in the wild.  Yet if we want to understand the excitement of the circus in years past, we can do no better than to turn to the musical “Barnum,” with crisp direction by Jim Gross and choreography (encompassing not only the stage but all sides of the auditorium) by Kelly Alt.  The show even boasts a circus consultant in the person of Gregory May!

The Heritage Players production is thus recommended, not just as a fine and entertaining show with good music but for reflection on the role of the circus and public entertainment in American culture.

The show is a biography in musical format of P.T. Barnum, 1800’s circus impresario.  It covers his life, audacious projects for commercial success in showmanship, and the unique marriage of this dreamer to his down-to-earth wife Charity.  In a way, the life of Barnum and his circus is a symbol of the American Dream and entrepreneurship.  At the same time, the story of the man who said “there’s a sucker born every minute” and made “humbug” (illusions and deceptions) an art form has much to tell us of American culture in the present, to wit:   media sensationalism, “reality shows,” and an occasional circus-like atmosphere which has entered the world of politics.  At one point, Barnum damns with faint praise “patriotic humbug,” saying “there’s none better.”

The set design by Ryan Geiger is simple but effective.  The circus big-tent backdrop resembles the red and white stripes of the American flag.  The life of Barnum covers much in the way of Americana.  Noting that the country is growing bigger and bigger as new states are added to the Union, Barnum says there must be a bigger and bigger circus to match such growth.  If you cannot get it all in one ring, use a three-ring circus, he proposes!

The cast of this production is outstanding, with Matt Wetzel as an impressive, brash, and idealistic P.T, Barnum.  Rachel Weir as his understanding wife Charity and Kelly Rardon as a sort of femme fatale in the character of Swedish opera star Jenny Lind add lovely voices to the mix, performing outstanding solos in Charity’s “One Brick at a Time” and Jenny’s appropriately operatic “Love Makes Such Fools of Us All.”  A standout performer in both comic personality and fabulous singing is Renata Hammond.  Renata covers two roles – the “world’s oldest woman” (so claims mountebank Barnum) singing “Thank God I’m Old” and as the Blues Singer belting out “Black and White” as Barnum attempts to run for public office.  (Not accidentally, political references abound in the show, as when two politicians are dressed as circus clowns.)

There are some limitations to this small-scale production, perhaps due to budgetary constraints.  Yet many of these are turned into assets by the Heritage Players.  One has already been referenced:  the simple flat circus tent which doubles as the American flag, urging the audience to reflect on what P.T. Barnum and the show on his life say about American history and culture.  Another limitation perhaps is recorded rather than live music, though this, too, has been exploited to advantage:  the music also includes calliope sounds of songs during audience seating and intermission which were not in the Broadway show, but which evoke circuses and music of an earlier popular-song era (“East Side, West Side,” for instance).  Finally, the producers devise simple but very clever ways to introduce Jumbo, “the world’s largest elephant,” and Tom Thumb, “the world’s smallest man,” on stage!

This show, with book by Mark Bramble, lyrics by Michael Stewart, and music by Cy Coleman which debuted in 1980 is seldom performed. The Heritage Players production is thus recommended, not just as a fine and entertaining show with good music but for reflection on the role of the circus and public entertainment in American culture.  “Barnum” runs through November 11, though only in a handful of performances, and the production is finally to be praised as a very clean show appropriate for the entire family.  As ever, a circus is entertainment for all ages, young and old!