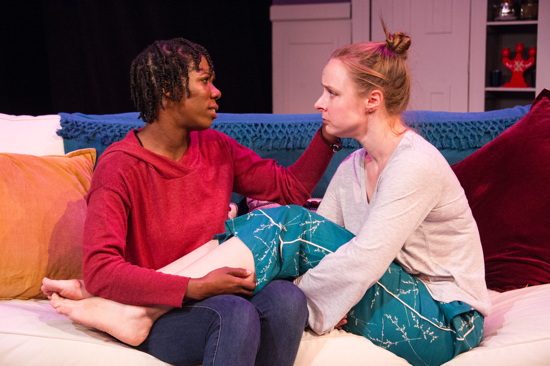 Is it wrong to be so enamored of a play called blight? Written by John Bavoso, it is a show that has solid writing, some really funny lines, and an assortment of characters that ring true—they are recognizable in their humanity and in their inhumanity.

As staged by Pinky Swear Productions at the Anacostia Playhouse space, one of the few caveats I have about the show is the pictures and decorations on the wall—they just didn’t look right for two lesbians who had just transplanted themselves from an upcoming District neighborhood to a small bedroom town in Delaware. They looked too staid, too lower-end mass-produced, with no personality. The other caveat may be a function of the stage space, but it was a little startling at times to catch glimpses of off-stage actors heading behind the “walls” of the house to their next cue.

Finished with the caveats, here’s what’s good about this show—nearly everything. The actors absolutely inhabit the roles, the script has something to say, the costumes suit each character perfectly, and you care about (most) of these people. They’re messy and contradictory and so is life.

Briefly, a lesbian couple buys a house that used to belong to the family of a mass murderer; no murders took place in the house, but he traveled to West Chester, PA, to shoot up a Planned Parenthood clinic. The two would-be homeowners are horrified and end up having to contend with how the townspeople want, actually demand, different solutions to the “problem” of the house. Meanwhile, Silvia wants to kickstart a family with her wife, Cat, and given the cheapness of the house compared to properties elsewhere, she persuades the unsure Cat to agree to buy the house, but without fully expressing how soon she wants to start a family.

Silvia is played by Pauline Lamb, and she portrays her as a kick-a*s woman who has worked hard to leave behind a chaotic childhood and establish herself in the middle class—and as a proud lesbian. This house represents a milestone for her. Cat, played by Rachel Manteuffel, is more passive; she notes once that her family never screamed at each other and she is obviously uncomfortable with confrontation; until she finds her inner warrior and changes the playing field for a whole bunch of people. These two are so natural and artless together I read the program half-expecting them to be a real-life couple. They embody the countless alterations people make each day when living intimately with another human being; these are two rich, nuanced performances.

Providing some comic relief as a very understated, wary real estate agent is Dannielle Hutchinson as Fanny Atwood. She put one in mind of a cat in her interactions with people—aloof, judging you, her own agenda. She has ties to almost everyone in town, however, and as one of the few African-Americans in this very white suburb, which she really seems to detest, you wonder why she stays.

Jacqueline Chenault portrays Tracy Roberts, the mayor, who is not a pleasant person behind the smile. She wants to tear the house down and salt the earth and sees no reason why the two new homeowners should get in her way. She hires Dave Sullivan, a “bad house” real estate consultant to examine the house and the circumstances and give a report to herself and the town council. As played by Dave Sullivan, he turns out to be probably the most honorable person in that town. Lisa Rogers is an activist played by Hilary Kelly; her’s is the most stereotypical role—strident and didactic and possibly crushing on Cat. She does have a couple of shouting matches with the evangelical Christian next-door neighbor Craig Cappetta (a smarmy Brian Crane); these two obviously have a history. When these two butt heads, it is very reminiscent of the current tide in political discourse.

While Cat and Silvia are trying to settle into their new house and figure out next steps, the ghosts of the former owners, Loretta, the mother, and Kristofer, the son and murderer, play out some of the past in that house. It brings a hint of a ghost story to the proceedings; it also makes one wonder what one would do if they found themselves in the position of buying a property that had a stigma on it. As Silvia points out, if everybody refused to buy a house where something bad had happened, no one would be living inside anywhere. The portrayal of Loretta by Rebecca Dreyfuss is heartbreaking; it seems to have been less thought out by the author, but she colors outside those lines to show a woman with an older teenage son who is trying so hard to be a good parent, a good employee, and a good person. Thomas Shuman plays Kristofer as a human boy who feels betrayed by those who should protect him and who looks desperately for belonging in the wrong place. Both actors give very nuanced performances and help humanize the so-called monster.

This play asks some interesting questions. Who should be judged? Who should get to do the judging? Is it possible to ever take self-interest out of any situation? Why do we judge so quickly? How do we take fear out of an equation before we act on it? Why can’t humans be more accepting? What are we so afraid of? This show also engendered some lively conversation on the ride home; but whether it does or not, it’s also a really well-done show with an erudite script, and a powerful emotional wallop.