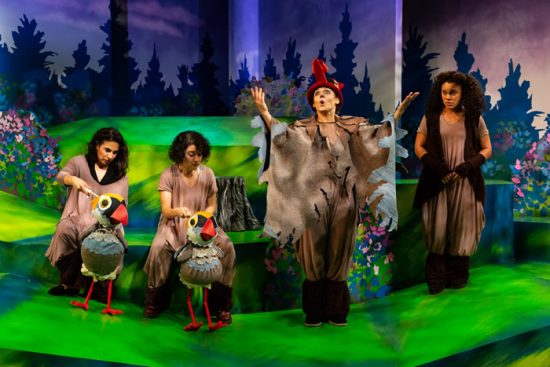 I brought my friend Maddie along with me to review the Adventure Theatre MTC world premiere production of “Blueberries for Sal.” While I have the experience of some years as an actor and theatre critic, Maddie has the expertise of being almost four years old. We both loved the production.

Robert McCloskey’s 1948 picture book about a girl and her mother encountering friendly bears while on a blueberry-picking expedition has a sparse plot. What makes it memorable 70 years later is its spirit. Little Sal is not one of those shiny girls of so much children’s fiction of the time, dolled up in bows and pretty dresses. She’s a messy, adventurous kid, and her energy drives Jessica Jung’s production and its all-female cast.

‘Blueberries for Sal’ is an all-ages show, and theatre lovers can take that to heart — you don’t need to be in the single digits to enjoy it.

Michael J. Bobbitt and Sandra Eskin have set their “Blueberries” in a space that is both modern and timeless. Sophie Schulman’s Little Sal is a 21st-century kid, but still young enough to be excited by the prospect of berry-picking to make pie. Schulman zips around the stage with that elementary school energy we wish we could still salvage. As her mother, Sarah Corey is wry and indulgent, poking gentle fun at Sal’s mania while giving her room to explore.

The co-playwrights’ cleverest conceit is in the portrayal of the bears. Mama Bear (Karen Vincent) is a complement to Sal’s mom, while Little Bear is written as a contrast to Sal. Where Sal is adventurous to the point of being reckless, Little Bear is so cautious as to be nearly agoraphobic. It’s a delight to watch Alex De Bard’s wide-eyed Little Bear slowly learn to embrace the world.

The production is a visual feast that would fill a hundred of Sal’s little buckets. Jessica Cancino’s abstract set consists of angled risers brushed in green and blue paint to represent Blueberry Hill in late summer, with shadows casting trees on the stage. In a delightful effect that got some “ooooh”s from the young audience, the blueberries are represented by tiny blue lights, with the tips of the actors’ fingers briefly glowing blue as they pick each one.

Bobbitt and Eskin build out the plot beyond McCloskey’s original framework. Little Sal and Little Bear each meet some friendly birds who offer some guidance as they try to reunite with their mothers. The birds are among the several intricate puppets designed expertly by Dre Moore; they, and a great galumphing moose that wanders through the house several times, are crafted out of wintry cloth that evokes the story’s Maine setting. Jeannette Christensen’s costumes continue this motif, with the animals appearing as bundled up as Sal and her mother.

William Yanesh’s joyous songs embody the everyday excitement of early childhood and the pride that comes in being more of a “big kid” with each passing day. The final song, as summer moves into autumn, is especially lovely.

“Blueberries for Sal” is an all-ages show, and theatre lovers can take that to heart — you don’t need to be in the single digits to enjoy it. In dispiriting times, it is nice to know that we always have children’s theatre, and even really big kids can benefit from an hour of pure happiness. After the show was done, I asked Maddie if she had a favorite part. She thought for a bit, then said, “All of it was great.” I agree.