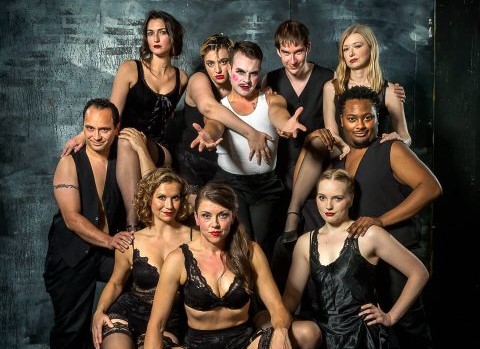 A Broadway musical on so many actors’ bucket list, “Cabaret,” presented by Vagabond Players in Fells Point, Baltimore. It is as quaint as it is racy –like so many renditions of this vintage production. This Kander and Ebb’s 1966 musical takes place in Nazi Germany as the country knocks on the door of World War II. It centers in Berlin’s enticing nightlife and people caught along the fringes. The show is luscious and unbridled, as one might expect from its generationally transcending reputation. This is quite evident by the stiff and easily stirred young American author, Cliff Bradshaw (played by Brian Kraszewski), who learns rather quickly about Berlin’s sensual pleasures –especially the ones within the wanton “Kit Kat Club.” What he (and I) find is simply too stupefying to resist and too decadent to forgo.

Enter Emcee, played by Adam Cooley, who performs this role like he’s been doing it his entire life. Vagabond Players puts on an alluring production with all the darkness and sexy laced comedy and leggings to sweeten the pie. I admit I couldn’t help but think of Liza Minelli in anticipation of this play, but the Vagabond ensemble earned my affection as I was hopelessly entertained by this ostentatious and snazzy production.

Under the direction of Eric C. Stein and featuring spectacular numbers from its lead cast, this thrillingly raunchy musical continues on through November 18, 2018. Stein has polished this version of “Cabaret” with many of the frills often associated with it. I found this production very authentic and raw, with just enough subtlety to highlight real human tension. It doesn’t try to unpretentiously seduce your eyes with visual stimulation. The mind-tugging songs and flashy choreography feels less like a revue and more like the unpacked imagery of Joe Masteroff’s book musical. The numbers flow so well and never feel like jagged interludes. Although I think there is always some risqué one should expect from “Cabaret,” even by today’s standards (versus when the Broadway play first hit back in the late 60s), it still managed to make this old boy blush.

There’s a raw inventiveness in this production but utilizes a splendid cast with modest props and a five-piece band behind the curtain of a small stage. Music director Stephen Deininger pieces together nicely fitted music numbers and impeccably well-timed transitions. The ensemble was magnificent and beautiful in so many areas. I was mesmerized by mostly all the cast, but some notable mentions include Ryan Gunning as “Sally Bowles,” who put her own signature on the performance of “Mein Herr,” and it was delectably charming.  Jeff Burch as “Herr Schultz” and Amy Jo Shapiro as “Fraulein Schneider” displayed such affectionate chemistry, especially during the number “It Couldn’t Please Me More (The Pineapple Song).” I would love a recording of them singing it, I liked it that much. Libby Burgess as “Fraulein ‘Fritzie’ Kost” and her endless stream of sailors was like an armored rose with thorns to match. Adam Cooley as “Emcee” put on an astonishing performance. It reminded me of John Stamos playing this character some years ago, but Cooley looks much more comfortable in this role.

I couldn’t help but feel a little like the character Cliff Bradshaw as I watched this musical. The movement of the dances, the melodic tempo of the interactions between the actors, the antiquated stage and the setting of this story heaved my conscience. Perhaps this is why “Cabaret” is so widely embraced and produced in so many venues seemingly everywhere. It is a true classic and a must for all adults who enjoy musicals. Vagabond Players presents a wonderful performance with everything I had come to expect from the midnight veil of lust. If “Cabaret” is on your bucket list, then make it a date in Fells Point, Baltimore.

To purchase tickets and for more information about the showing of “Cabaret” at Vagabond Players in Fells Point, please visit their website here.