Theatre Review: ‘Dracula’ at The Little Theatre of Alexandria 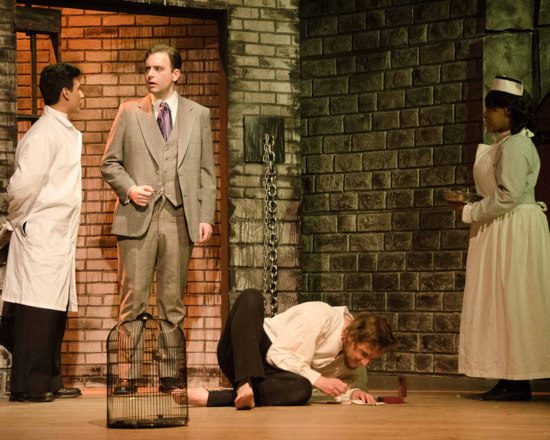 Bram Stoker’s classic horror story “Dracula” has captivated and terrified audiences since 1897. Stoker paved the way for vampire lore and fantasy. In the original novel, Count Dracula wants to move to England because he is not getting enough to eat (drink) in Transylvania. Once there a small but mighty team, led by the equally legendary Abraham Van Helsing tries to stop the Count from spreading his curse further. Steven Dietz took Stoker’s tale and did a lovely job adapting it for the stage. The Little Theatre of Alexandria’s production is full of life and charm.

Set designer Matt Liptak brought Victorian England to life with the multi-layered and dimensional set. The use to different zones on stage representing different locations but all coexisting was a clever and powerful use of space.

This production of ‘Dracula’ directed by Jennifer Lyman is perfect for the Halloween season.

Jean Schlichting, Kit Sibley and assistant Michelle Harris all designed the gorgeous and eery costumes. The use of color and texture was lovely in a creepy way. At the beginning we see Renfield, a follower of Dracula’s, give an introductory monologue as a seemingly sane and put-together man and then he crumbles into a state of insanity and dishevelment. This extraordinary transformation of costume set the tone for the rest of the show.

The role of Renfield was played by Jeff Elmore. He brought a depth to the role that rallies the audience to pity him. His high energy and physical performance was compelling and he guided the narrative of the story.

The titular character and most famous vampire of them all was played by Chris Andersen. His creepily fluid movement and uncomfortable sensuality made him a perfect fit for the role.

One of Dracula’s unfortunate victims, Lucy Westenra, was played by Lynley Peoples. Peoples’ performance was delightfully childlike and highly emotional. She filled the stage with her presence. The rest of the ensemble included Chanel Lancaster, Danielle Taylor, and Syed Murshed.

This production of “Dracula” directed by Jennifer Lyman is perfect for the Halloween season. It is that time of year to get spooky.

“Dracula” runs at The Little Theatre of Alexandria through Nov. 3, 2018. For tickets and more information click here.