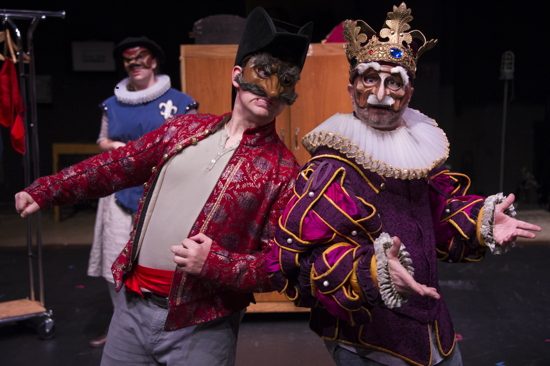 Faction of Fools, Washington DC’s only Commedia dell’arte company, has brought “Henry V” to life with its signature style. With a scrappy and nimble aesthetic, they took what is often viewed as a dull Shakespearean history and extrapolated the humor and heart of the story of young Harry leading his people to victory.

This is a truly special and unique production of ‘Henry V’ that pulls out a sense of play and wonder.

This ensemble of six actors, under the direction of Paul Reisman, work together to create a fast-paced and energetic storytelling experience. Each of their many characters had distinct vocal and physical characteristics which they switched between effortlessly. The ensemble included Kiernan McGowan, Jesse Terrill, Hannah Sweet, Ben Lauer, Julie Weir, and Casey Johnson-Pasqua.

McGowan’s titular King Henry V, better known as Harry, was genuine and sweet. He was certainly the most “straight man” of any other character but he embraced the silliness with enthusiasm. McGowan brought a warm authenticity to the famous St. Crispin’s Day speech that made it feel brand new. His strength in connecting with the audience pulled us along on the journey.

Weir played the young Katharine, who Harry attempts to woo. She is French and he is English so the language barrier allows for a delightfully awkward encounter. Weir’s childlike innocence and sweetness was extremely funny. In one scene, where she attempts to learn English from her lady-in-waiting Alice, played by Johnson-Pasqua.

Reisman’s direction felt both larger than life and intimate at the same time. The physical comedy and extreme caricatures of some of the characters never took away the intention of the story. The fluidity and subtlety gave this production a special spark that is sure to ignite curiosity and joy in any audience member.

Lynly A. Saunders designed the versatile costumes for this piece. With actors not staying the same character for long, they changed their costumes and masks quickly and with ease. The use of robust colors and dynamic textures made for a pleasing visual experience.

Faction of Fools is committed to accessibility and the use of American Sign Language in their shows. Dr. Lindsey D. Snyder acts as the ASL consultant on “Henry V.” Nearly every actor uses some ASL during the course of the show, with one using strictly ASL. A few scenes are also in French.

This is a truly special and unique production of “Henry V” that pulls out a sense of play and wonder. If someone thinks they wouldn’t enjoy a Shakespearean history, take them to this. It is sure to change their mind.